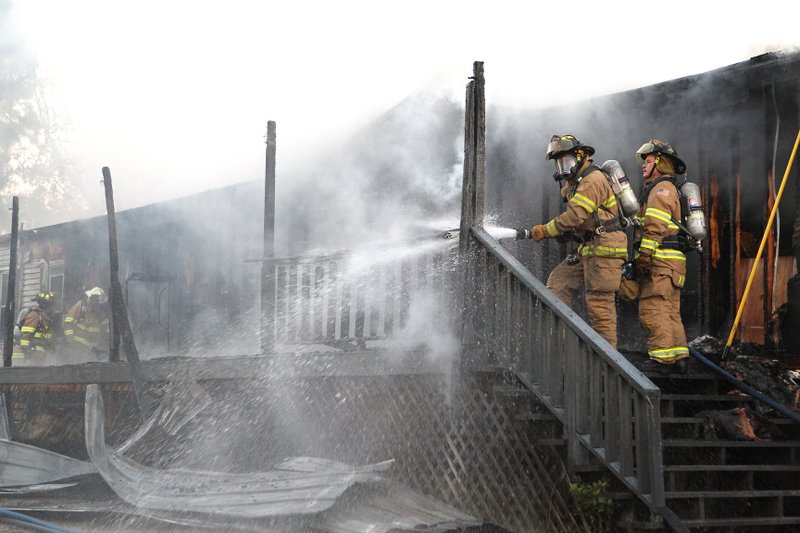 The body of Debbie Rushing, 56, was found in the burned remains of her mobile home at 124 Mallview Court, off Files Road.

Braughton said the first firefighters on the scene "took immediate action" to protect another adjacent occupied mobile home, but entry could not be gained into Rushing's home until the fire was knocked down.

When firefighters were able to enter the mobile home, they continued to encounter fire throughout the structure and found Rushing's body in the master bathroom, adjacent to the master bedroom, and the fire marshal notified the Garland County coroner's office, Braughton said.

He said there was only one smoke detector found in the residence, which was located outside the master bedroom, but the battery had been removed.

Braughton said the fire apparently began in the living room but the exact cause was still undetermined late Monday.

"It's a tragedy, just a tragedy that no one and no administrator ever would want to face," said Hot Springs School District Superintendent Joyce Craft.

She said the school initiated its crisis plan after learning of Rushing's death, and administrators informed students in their individual classes Monday morning. Administrators reported that the students handled the news as best as could be expected, responding in a mature manner, Craft said.

Counseling from the school's staff and external services were made available to students. Craft said school counselors Jerry Scroggins and Roberta Weiner were trained for such a situation and responded appropriately. The school's administrators said the external counseling agencies were "magnificent" in helping the school cope with the tragedy.

Craft said Rushing had been employed by the school district for more than 30 years and all 18 years of her teaching career had been at Hot Springs Middle School. Craft described her as "a great person and a great educator, a no nonsense, straightforward teacher."

Rushing had served as a substitute teacher for three years before becoming an official district employee in 1985 as a secretary in the central office, then worked full time and took college classes for much of the next 12 years to become a teacher.

She graduated from Central Texas Commercial College before becoming a substitute teacher, and later attended Garland County Community College, followed by courses at the University of Arkansas at Little Rock. She entered Henderson State University in Arkadelphia in 1992 and graduated in 1996 with a degree in Business Education and a Business Vocation endorsement.

Craft said Rushing's dedication and perseverance to become a teacher "served as a shining example for the success that single parents could achieve."

Rushing was hired at the middle school in 1996, and had taught career and technical classes at the school every year since. She continued her education and eventually earned a master's degree.

Rushing wrote in an application about 20 years ago that she "received a love for teaching in the Hot Springs School District."