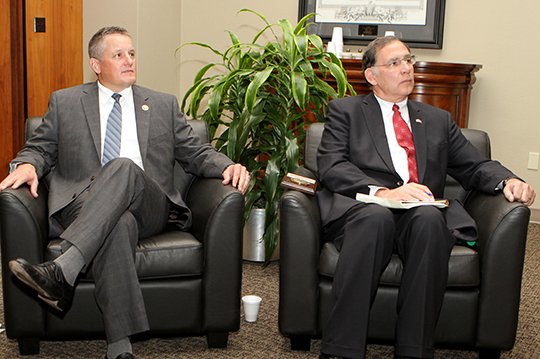 The Sentinel-Record/Richard Rasmussen CHAMBER SPEAKER: U.S. Rep. Bruce Westerman, R-District 4, left, and U.S. Sen. John Boozman, R-Ark., visited with a group of businessmen and community leaders Thursday at The Greater Hot Springs Chamber of Commerce. Boozman said in his address to the group that he supports new trade relations with Cuba and community hospitals need to be protected.

"We can't create jobs, but we can put ourselves in situations more favorable for economic activity," Boozman told a group of Hot Springs businessmen and community leaders Thursday at The Greater Hot Springs Chamber of Commerce.

"Things like trade with Cuba, which I'm very supportive of, and I think we need to do that. We've made a lot of progress in the last four or five months and it is a great opportunity for Arkansas and the Cuban people," he said.

Commenting on a statement made by a U.S. representative and former coach that if you run the same play 40 times and don't get anywhere, you need to start thinking about doing a different play, Boozman said "that's the situation we're in."

"We've not done a good job as far as changing the culture in Cuba. I believe when you trade stuff, you trade ideas, you trade principles, so as a result, I think it's not going to be too long before things open up and it will be good for us and the Cubans," he said.

Boozman said the Senate has passed a trade promotion authorization for the president, which is important in that it allows him, and the next president, to "bargain out a deal."

He said Congress will weigh in on the bargaining while it is going on, and the local chamber of commerce and the national chamber need to weigh in as well to say what things are needed to be included or the chambers will not provide their support.

"If we're able to strike a deal, it's good for them and it's good for us. It's not free trade, but fair trade. We'll eventually vote on that and hopefully we can get that done. I think that would be really good for our country," he said.

"You can have all these container ships coming in (to the country) filled to the brim with foreign products, but we need a bunch of stuff going out that is marked 'Made in the USA' to these other countries," he said.

"Some of you are bankers and you know what the Dodd-Frank (Wall Street Reform and Consumer Protection Act) is doing to you and we're working hard to try to get rid of the onerous regulations that have been placed on all banks," he said.

He said many community banks had nothing to do with the meltdown that occurred in 2008 and 2009, but they had the same regulations put on them as larger banks. As a result, compliance costs are increasing tremendously.

"You just can't operate if you can't get a loan and don't have credit. The problem we're getting into now is you have to check all the boxes to make the loan and that isn't what America is all about. We're getting ourselves into a situation where we're hamstringing (banks) and they can't make those kind of deals based on the fact they like you and have a gut feeling the loan will be paid back.

"Those are the things we're working hard on. We're concerned about all the regulations coming out that hamstring development, raises costs of compliance, and infringe on property rights," he said.

"The good news is that we're actually getting things done now, we're passing bills, and have passed a budget for the first time in six or seven years. Those are positives," he said.

Boozman also praised the community hospital in his hometown for saving his life last year after he was found to have a life-threatening tear in his aorta.

"For some reason, it developed a tear and as the heart pulsed it pushed on the tear and pretty soon things began to fall apart," he said.

With a deep-down feeling that something was wrong, Boozman said he went to the hospital where an imaging test was performed and, he said he tells people, "you know you're in trouble when your nurses come back in with tears in their eyes."

"But I was blessed, and had great care in the community hospital about a mile and a half from where I live. It was one of those things that many people don't get through, but if you do, they patch you up and you have a wonderful chance of going forward," he said.

One of the reasons Boozman said he tells the story is because it illustrates the importance of community hospitals.

"If I'd had to travel a long way, I wouldn't have made it, so we need to protect our community hospitals, not only for health reason, but they are the backbone of the community. Many of them have the best-paying jobs in town and they are one of the first things business look at when seeking to locate, and retirees look for in the availability of strong health care," he said.