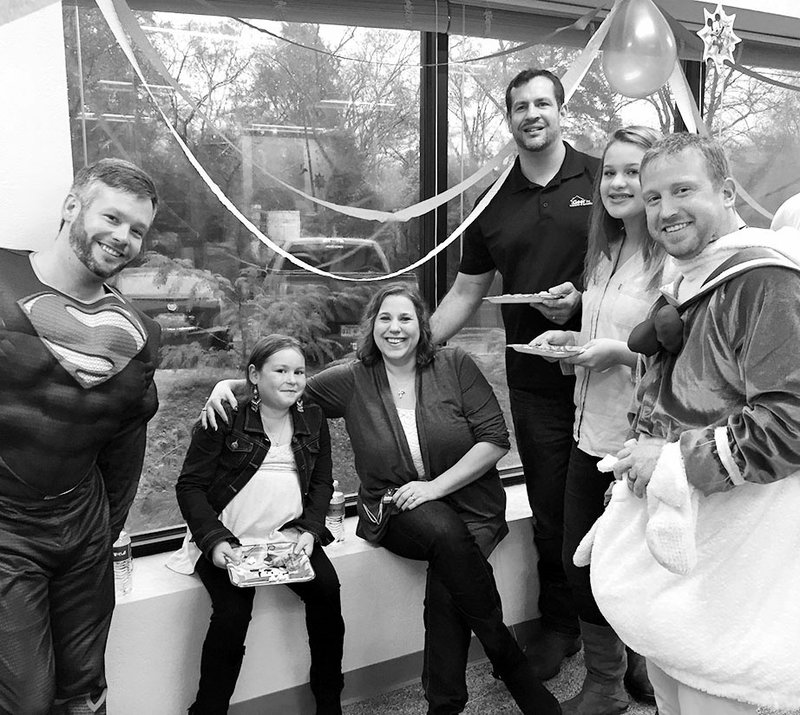 A test drive turned into the trip of a lifetime last week for 8-year-old Lake Hamilton student Sierra Geer.

Her parents, Marnee and Bob Geer, and her sister, Ashlynn Geer, 13, told her on Tuesday that they were going to Orr Cadillac to register for a drawing for Christmas money.

Corey Baldwin, of Orr Cadillac, took the family on a test drive, but in reality Baldwin was taking them on a trip to a local business, Window Source. Once they arrived, Sierra Geer was surprised to find the employees dressed as Disney characters, and discovered she had been selected to receive a Make-A-Wish Foundation trip to Walt Disney World Resort, sponsored by Window Source.

The Window Source receptionist was dressed as Minnie Mouse, and Daina Sargent, executive assistant for Window Source, dressed as Daisy Duck, led the family upstairs where all the company managers and leaders were waiting, in costume, to surprise the third-grader.

Sierra Geer was presented with her wish, a Minnie Mouse suitcase and a new shirt from Window Source. She was also served a special cake made to her specific dietary requirements, created by Carla Wood, of Sweet Woods Bakery, who is also a marketing leader for Window Source. Party decorations were by Sargent and DeShawnna Dunn, advertising coordinator.

Bob Geer said Sierra Geer was "completely surprised and excited" when she learned her family would leave last Friday for a 10-day trip to Orlando, Fla.

"It brought tears to my eyes," said Bob Geer, who said he has been on "cloud nine" since the party.

Sierra Geer was born with a genetic disease called glycogen storage disease 1a, or GSD, according to her father. GSD occurs when a person is missing an enzyme in the liver, which affects how the body gets energy.

Bob Geer said they first realized something was wrong when Sierra Geer was 6 months old, because she was not growing at the normal rate. It was not until she was a year old that her pediatricians finally agreed with the family that she was not developing normally. She was sent to Arkansas Children's Hospital in Little Rock, where she finally was diagnosed.

As a result of the GSD, she also has hypoglycemia and is on a very strict diet to help control the disease.

"Looking at her you wouldn't think anything was wrong with her," said Bob Geer about his daughter who he described as a "happy kid."

She continues to receive treatment at Children's Hospital, where she had her initial meeting with Make-A-Wish Foundation to determine her eligibility for the program back in July. Bob Geer said Marnee Geer started working with wish coordinators to plan the trip.

He said the family will stay at the Give Kids the World Village, located close to Disney World, a 79-acre, nonprofit "storybook' resort" where "children with life-threatening illnesses and their families are treated to a weeklong, free fantasy vacation," according to the Village's website.

The Geer family will visit Disney World, Sea World and Universal Studios. Bob Geer said that while they are visiting, the family will extend their stay so Sierra Geer can go see Winter the dolphin at Clearwater Marine Aquarium. Winter, a dolphin that swims with the use of a prosthetic tail, was the inspiration for the movie "Dolphin Tale." Bob Geer said Sierra Geer fell in love with the dolphin when she watched the movie because it has a disability just like she does.

Carol Isom, development officer for Make-A-Wish Mid-South, said she was happy that Window Source could sponsor Sierra Geer, a "darling little girl." Isom said Make-A-Wish is looking for more sponsors like Window Source in the Hot Springs area because the requests currently outnumber the sponsors.

"I am so appreciative of the generosity of the sponsors, " said Isom.

Sierra Geer's surprise is the second Make-A-Wish wish sponsored by Window Source. The first was a Greek cruise granted to Colton Miller, 13, who had a tumor on his pineal gland and one on his pituitary glands. Window Source also contributed to a third wish this year.

Sargent said Window Source owners Morgan Wiles and Shawn Keefe told their employees last December that they wanted to start making wishes come true in 2015, and the employees "jumped on the idea."

The company places a portion of the proceeds from recycling aluminum taken from old windows when their installers put in replacement windows into an account with Make-A-Wish. When a minimum amount is built up in the account, they are able to grant a wish.

The company's goal is to sponsor at least two wishes every year.

"I just want to say thank you to Make-A-Wish and Window Source. I can't say thanks enough," said Bob Geer.