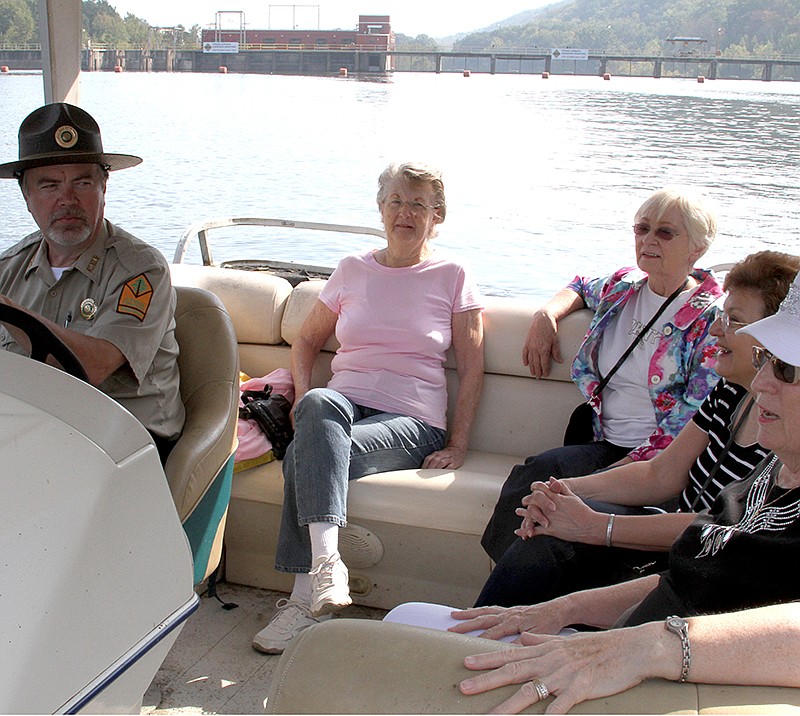 DIAMONDHEAD -- Members of Diamondhead Questers recently had the chance to enjoy the beautiful October weather while learning about the history and facilities of Lake Catherine State Park.

The Questers set out in two groups Thursday morning on a boat tour led by park interpreter Steve Donahou. Throughout the tour, Donahou answered questions and showed the group historically significant sites on the lake.

The Questers, who are interested in historic restoration and preservation, learned about the cabins and other parts of the park built by the Civilian Conservation Corps in the 1930s and how the park was run by German prisoners of war during World War II. Donahou told the group about the 70 campsites, 20 cabins, boat rentals and more available at Lake Catherine.

Donahou told the group about Harvey Couch, founder of Arkansas Power & Light Co., who donated the land that became Lake Catherine State Park after the lake was created by the construction of Remmel Dam. Lake Catherine is the first lake state park in Arkansas. According to Donahou, Lake Catherine was named after Couch's daughter, Catherine. He took the group into Tiger Bay to see Couchwood Island, a complex of five cabins owned by Couch's descendants.

"A lot of what Harvey Couch did brought us to where we are today," said Donahou.

The lake tours are available through the start of November each weekend and free to the public. In the off season, tours must be requested in advance.

"Arkansas has the best state park system," said Paulette Webber, a member of the Questers.

Questers is an international organization with 13 chapters in Arkansas. The Diamondhead chapter, with 18 members, has had its charter for 35 years.

According to Pam McAllister, president of the Diamondhead Questers, there are no qualification except the love of history to join the group. She said the international motto, "It's fun to seek and a joy to find," sums up their group perfectly.

The group's ongoing project is to maintain the grave site of the Neusch family located on the number 10 fairway of the Diamondhead golf course.

The Diamondhead Questers meet for programs on the second Thursday of each month from September through May.