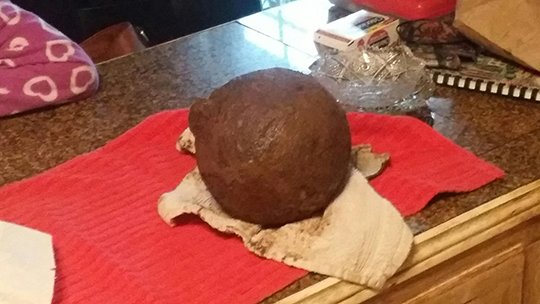 Submitted photo LAND MINE: What is believed to be a Civil War-era land mine is displayed on a kitchen counter in this cellphone photo taken by Hot Springs resident Matt Bell. The device was found in Danville by Bell, who initially thought it was a cannonball. Photograph is courtesy of Bell. 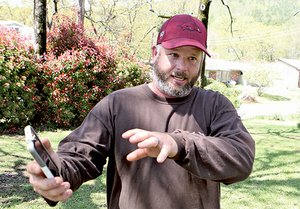 The Sentinel-Record/Richard Rasmussen STARTLING FIND: Matt Bell, of Hot Springs, talks to The Sentinel-Record about his discovery of what he initially thought was a Civil War cannonball, which turned out to be a potentially still active land mine from that era.

A local man who was excavating outside Danville Wednesday found what he thought was a Civil War cannonball, but when it turned out to be a possibly still active land mine, it prompted the evacuation of his neighborhood and the arrival of a military bomb squad Thursday afternoon.

Matt Bell, of Hot Springs, said he and his crew were doing some excavating work near a large creek that feeds into the Petit Jean River just outside Danville in Yell County around noon Wednesday when they found the object.

He said the worker who actually pulled it out of the ground tossed it several feet, thinking it was harmless. Bell said, "I immediately knew it was Civil War artillery, but I thought it was a cannonball."

He put the object into the back seat of his pickup and brought it back to Hot Springs with him. He said he showed it to his friends and family and they had it on the kitchen counter at one point, measuring it and weighing it.

Bell said the object was 6.25 inches in diameter and weighed 31.6 pounds. He noted he has since learned the Confederate land mines weighed 32 pounds, and speculated that corrosion over the years probably ate away at it, resulting in its reduced weight.

Still thinking it was a cannonball, he said he took it to the Civil War Museum West in Hot Springs. He said he left it in his pickup and brought one of the curators out to look at it. He said the curator told him it was not a cannonball and was in fact a land mine.

"He took me back inside and showed me a photo of one and I realized he was right. I'm really thankful it didn't blow up."

He went back to his residence on Woodberry Street and left it in the back seat, noting "I had a seat belt around it the whole time." He said he then called Hot Springs police around noon and they responded to the scene.

Officers evacuated all the residents on Woodberry, HSPD Cpl. Kirk Zaner said, noting there were about 15 to 20 houses, but many people were not home at that time. They also blocked off the street at either end to prevent traffic, and Hot Springs firefighters also responded to the scene. 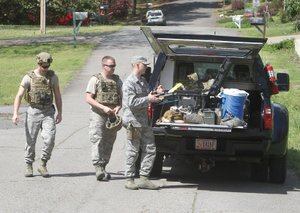 The Sentinel-Record/Richard Rasmussen CLOSER LOOK: Members of the Little Rock Air Force Base Explosive Ordnance Disposal Team prepare to X-ray what is believed to be a Civil War-era land mine Thursday. The device was found in Danville by Hot Springs resident Matt Bell, who initially thought it was a cannonball.

The Little Rock Air Force Base Explosive Ordnance Disposal Team was notified and responded a few hours later. Team members conducted X-ray testing of the device and determined there were possibly explosives inside. They then transported the device to the Garland County Landfill, where it was detonated. 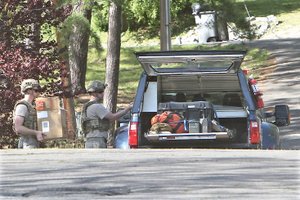 The Sentinel-Record/Richard Rasmussen BOMB SQUAD: Members of the Little Rock Air Force Base Explosive Ordnance Disposal Team load what is believed to be a Civil War-era land mine into their vehicle Thursday before taking it to the Garland County Landfill to be detonated. The device was found in Danville by Hot Springs resident, Matt Bell, who initially thought it was a cannonball.

Davis acknowledged it would have been nice to have preserved the device, but noted that public safety was of paramount concern.

According to http://www.history.com, the mines, or torpedoes, as they were sometimes called, were largely a Confederate weapon. They were originally developed by Gen. Gabriel J. Rains, typically iron containers rigged with gunpowder, a fuse and a brass detonation cap.

Bell said he did some research and learned the mines contained a little glass vial with chemicals, and 7 pounds of pressure applied to the detonator on top would break the glass and trigger a chemical reaction which would cause it to explode.

He said he had noticed what appeared to be "a nipple or button" on top of the object, but "I thought maybe that was where it came out of the mold. I still thought it was a cannonball."

Bell stressed he still realized it could be live ammunition so he was careful with it, but had no idea how potentially lethal it might be. "At this point I'm feeling very lucky," he said. "This is probably one of the first ones made."

His friend, J.R. Klein, said, "I still can't believe I was picking that thing up. You just don't think of land mines and the Civil War as going together. It's so bizarre."

Bell noted he learned there was a lot of fighting in that area of Danville during the Civil War, so finding a relic was not that surprising, but he never expected to find a land mine. "I almost wish I could keep it," he said, laughing.