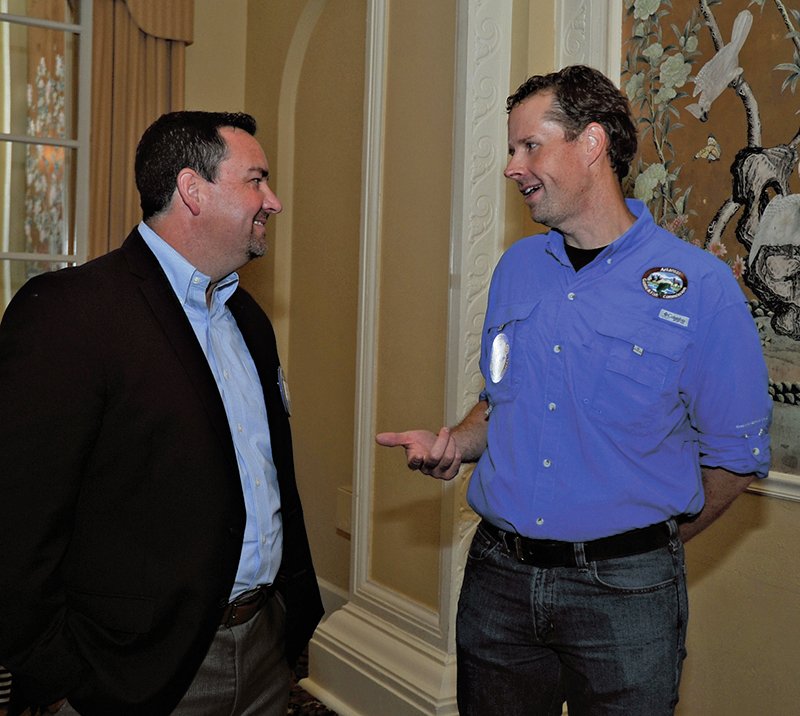 As the opening day of archery deer season approaches on Sept. 24, the Arkansas Game and Fish Commission is warning hunters of the potential to encounter diseased deer in northwest Arkansas.

When it first discovered chronic wasting disease in a female elk harvested near Pruitt in October 2015, AGFC engaged a response team it created in 2006, but had hoped it would never have to use. A second cervid, a white-tailed deer, also tested positive for the disease.

"When the phone call came, I was in North Carolina at a deer conference on Feb. 17. From North Carolina to Arkansas, we reviewed our plan and by the time we got back in state the commission was ready to approve our plan which would free up fawns to allow us to do our surveillance. We developed a focal area and wanted to look at prevalence," Cory Gray, AGFC deer program coordinator, told members of Hot Springs National Park Rotary Club Wednesday during their weekly noon luncheon at the Arlington Resort Hotel & Spa.

Chronic wasting disease is a fatal neurological disease that attacks cervid species like deer and elk. It can stay dormant in animals for years, but they can still infect others prior to showing any signs of infection themselves. Currently, there are no vaccinations or cure for the disease, and it is resilient to heat and enzymes. Symptoms include excessive urination and salivating, deteriorating body condition, lack of skittishness around humans, staring and wide stances.

"When you see these animals, their front legs will be sprawled out, their head will be low, neck out and staring. They are looking at you like they are looking over the top of glasses. They, as I call it, have a 100-mile stare. Most of the time you will find them standing in water where they are urinating and drinking at the same time," Gray said.

He said research shows that it can be passed to other deer or elk if an infected deer urinates on a plant and another deer consumes the plant. It can be spread through saliva, urine and feces and, in an attempt to slow the spreading, AGFC has prohibited the baiting of animals prior to the opening of deer season in Boone, Carroll, Johnson, Logan, Madison, Marion, Newton, Pope, Searcy and Yell counties. Baiting is allowed only from Sept. 1 through Dec. 31.

"As soon as a fawn is born, you have this social grooming by the mother. If she is positive, she could be infecting her offspring. If she is negative, then it could be the environment that is infecting the deer," Gray said. "In the chronic wasting disease management zones, we have prohibited feeding of animals. Try to avoid congregating animals. You can bait for the intent to harvest. We are considering bait as a tool to remove animals."

Chronic wasting disease was first discovered in 1967 in Wisconsin and was initially thought of as a western disease. Arkansas is now the 24th state to have the disease and out of 266 white-tailed deer sampled, 62 deer or 23 percent tested positive. States like Missouri and Illinois only have a one percent prevalence rate of CWD.