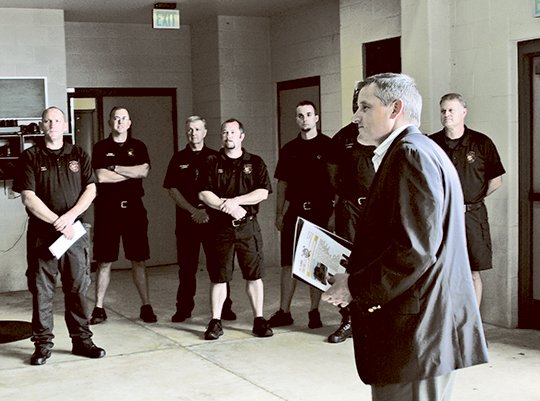 "The award of this grant will allow the fire department to establish a true live fire training facility. We are very excited about the training possibilities this burn building will support," Hot Springs Fire Chief Ed Davis said Monday.

The mobile training structure will be used on a weekly basis by the 11 fire departments and more than 350 firefighters in the Hot Springs region, according to a letter Westerman wrote to FEMA in January in support of the grant.

"The MTS will provide training to firefighters which will help increase the response capabilities of all departments within the surrounding area. It will also provide realistic training scenarios to firefighters to help alleviate potential life-threatening situations," Westerman wrote.

"These fire departments serve over 97,000 residents and host over 2.7 million visitors yearly. The MTS will be a valuable asset to the Hot Springs Fire Department and the surrounding volunteer fire departments," he said.

The total cost of the simulator is $495,000. The city's cost share will be just under $50,000; the city's grant application says the funds have been identified to meet the city's share of the obligation. The estimated overhead for the mobile simulator is $6,500 annually, including electricity, propane and a maintenance budget.

Davis said Monday that the grant request was principally written by firefighters Andy Davis and Kevin McCain, two of the department's younger members who "shouldered the task with great enthusiasm."

"They sought help from many people who assisted with the process of finalizing the application. In my opinion, the group effort produced a superior document," he said.

"It's always good when you have young people who want to learn, take on new tasks and succeed. The firefighter rank at Hot Springs Fire Department has a large number of those people. Andy and Kevin did a great job," he said.

Davis said the department also appreciates the support it received from the city manager and the Hot Springs Board of Directors.

The "Dual 48-foot Portable Stacked Live Fire Training Simulator" is manufactured by Fire Training Structures LLC. of Phoenix and can cover a "broad spectrum of training scenarios," according to the grant request, including ventilation training and simulation, vertical rescue training, and confined space rescue training.

The cost of the simulator, which is constructed on two tractor-trailer chassis, includes training on set-up/take-down of the simulator, delivery to the department, and certification of Hot Springs Fire Department personnel to safely operate and perform training using the simulator.

The simulator will be kept at the fire department's training ground and, if the need arises, the department has the capability, with city resources, to move the simulator.

"As a department, we have tirelessly discussed and examined the various options for mobile training simulators. In the end, we decided this particular model from Fire Training Structures best met our needs, and gives us the opportunity to cross-train with other agencies," the grant application said.

"A working structure fire is neither the time nor place to realize our tactics differ from those of our mutual aid partners. Having the ability to train our department and firefighters from surrounding departments in a controlled environment will alleviate potential life threatening situations in realistic training scenarios. This training is invaluable," it said.