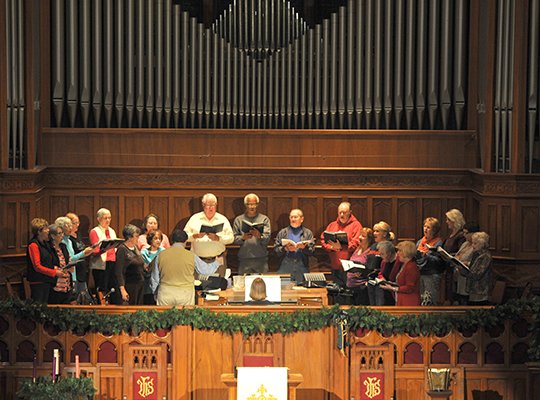 The Sentinel-Record/Mara Kuhn "JOY TO THE WORLD": First United Methodist Church of Hot Springs will present its annual concert "A Grand Central Christmas" at 6 p.m. Saturday. The concert will feature several different church groups, and the Fun City Chorus.

The Christmas concert will feature the various musical talents at FUMC, including two of the church's newest groups, the Quarter Notes, a children's choir for 3- to 5-year-olds, and the Heavenly Hosts treble choir.

Also performing will be Kidz Praise, a choir for 6- to 10-year-olds, the Chancel Choir, the Seasonal Singers, and the church's two bell choirs, the Chancel Ringers and the Sanctuary Bells. The ConneXion Praise Team will also perform, led by Bryan Gerhart, director of contemporary worship.

"The concert will feature a variety of music," Timothy Tucker, the church's director for traditional music and director for the concert, said in a news release.

Previously, the concert featured just the Chancel and adult choirs, but this year it has expanded to include the children and other groups, Tucker said.

He said the organizers thought moving the concert from Sunday to Saturday would also make it more accessible to people looking for a weekend activity.

Another change is the addition of a special guest group from outside of the church. The Fun City Chorus, a men's chorus from Hot Springs that sings a cappella music barbershop-style, will perform "Feliz Navidad," "Hallelujah," by Leonard Cohen, and "Silent Night."

"This is a tradition I'd like to continue since it is meant for the community," Tucker said, noting he hopes to be able to invite community groups and choirs from other churches to participate in future Christmas concerts.

Tucker said he wants the concert to be a community event that gets beyond the commercial parts of the holiday and gets to the heart of Christmas with praise and worship.

One of the evening's highlights will be the audience singalong of traditional Christmas carols, he said.

The concert is scheduled to last about an hour.

"We invite the Hot Springs community to join us for this special evening of celebration," Tucker said. "Our Christmas concerts have become one of the city's don't miss holiday events. The program will be a wonderful mix of music, a great way to enjoy the Christmas season. We hope our concert is on everyone's holiday calendar."