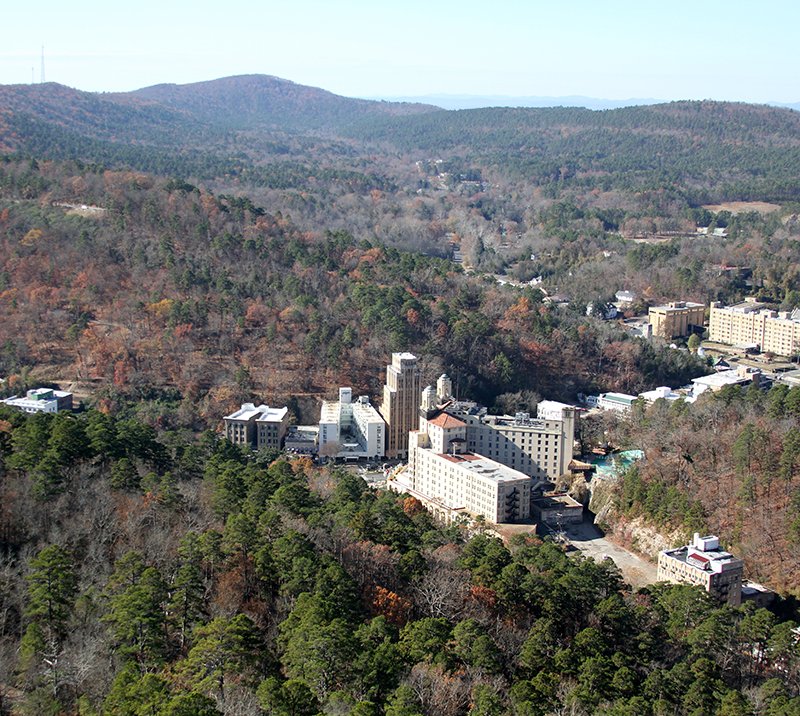 State, local and federal agencies say advance planning and training are just two ways Hot Springs is working to prevent, and respond to, a catastrophic fire at the scale that was recently seen in the state of Tennessee.

The fire that tore through Great Smoky Mountains began on Nov. 23 killed at least 14 people. On Nov. 28, the fire made its way to the city of Gatlinburg, causing heavy damage surrounding the city's main tourism district, according to media accounts.

Gatlinburg and Hot Springs have distinct similarities -- both are tourist destinations, are surrounded by forested mountains and have a downtown comprised of small businesses located in a mountain valley.

In the wake of the forest fires that engulfed the Tennessee cities of Gatlinburg and Pigeon Forge two weeks ago, The Sentinel-Record spoke with organizations that specifically prevent and, if necessary, fight natural disasters of that nature. The National Park Service, Hot Springs Fire Department and the Arkansas Forestry Commission all mentioned steps that are being taken to prevent such fires and the steps that would be taken if such a catastrophe were to occur.

In reference to the fire in Tennessee, Hot Springs Fire Chief Ed Davis pointed out the dry conditions of Great Smoky Mountains combined with 70-mph winds, which led to its rapid spread. He said that downtown Hot Springs would hold similar risks under the circumstances that reached Gatlinburg at November's end.

Adriane Barnes, the Arkansas Forestry Commission's director of communications, said that what happened in Gatlinburg is "a very unlikely worst-case scenario," pointing out the slim chance that a fire would be met with such dryness and high winds.

"It could happen, yes, but it's unlikely to happen very often," Barnes said.

Barnes did mention two potential causes of wildfires in Garland County. The first has to do with the fact that Hot Springs is an urban interface, which makes for much contact between residents and the community's surrounding forests.

Barnes said that the chance of a forest fire inevitably increases when people are involved, given that the majority of fires across the state are either caused by arson or burning debris.

The second is the current statewide trend for fires. Barnes said that since 2012, which saw 34,000 acres of fire in Arkansas, the state has only seen between 12,000 and 17,000 acres of fire each year. Garland County follows this trend, having seen an average of 191.67 acres burned each year from 2013-15 after 617 county acres burned in 2012. This kind of low activity has created a buildup of "fuels," such as brush and dry vegetation, in the forests, thus increasing the risk of a forest fire.

"Homeowners definitely make the biggest difference in what can turn into an out-of-control wildfire," Barnes said.

As for the buildup of fuels, National Park Service has used prescribed burns to lessen the chances of a resulting wildfire. Hot Springs National Park Superintendent Josie Fernandez said that such burns are a good example of fuel mitigation.

"There is no way that you can prevent a forest fire. Sometimes it's a natural cause," Fernandez said. "The only thing that you can do is to treat the areas where a wildland fire is likely to take place."

Davis said that if a fire with similar size and ferocity as that of Great Smoky Mountains were to take place in Garland County, it would be responded to collaboratively by all area fire departments, the National Park Service and the U.S. government through the Department of the Interior.

County Ranger Chad Noles said that it would be responded to more efficiently than Great Smoky Mountains, pointing out how Hot Springs' terrain would allow greater access to the fire.

"We don't have the terrain they have," Noles said. "Pretty much everything we have, we can put a piece of equipment on if we have to to fight the fire, where out there, they couldn't."

In the meantime, Davis said that the city of Hot Springs is keeping risks down by enforcing building codes and keeping its residents educated in the area of fire prevention.

"If you can keep the populous informed on things that will reduce the possibility of having a fire, you've made yourself a safer community," Davis said. "If you can keep your people trained to suppress the fires early, that adds to having fire safety, as well."