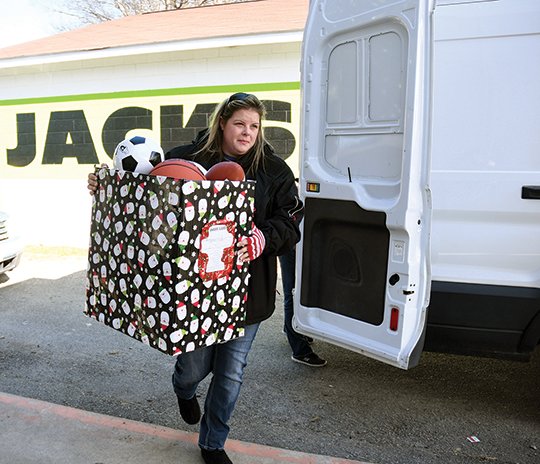 The Sentinel-Record/Mara Kuhn A TON OF TOYS: Janet Willis, founder of Miracles From Matthew, carries in some of the almost 1,000 toys her organization donated to Jackson House Tuesday. Willis started the organization in 2013 after the death of her 8-month-old son, Matthew Scott Bailey, who was born with heart defects and other medical problems.

The organization Miracles From Matthew delivered their largest toy donation of the season, almost 1,000 toys, to Jackson House on Tuesday.

Miracles from Matthew was started in 2013 after Janet Willis, its founder, lost her 8-month-old son, Matthew Scott Bailey, who was born with heart defects and other medical problems.

The organization was originally started to help Ronald McDonald House Charities of Arkansas because they provided Willis's family with Christmas and stayed there while Matthew was in the hospital.

As the organization grew, they were able to "expand our vision" and offer help to the Jackson House, Willis said, noting she contacted Jackson House last year and learned they were in danger of having to turn some families away from their Christmas toy program because they did not have enough gifts. Miracles From Matthew was able to help provide toys to the remaining families.

"I love this house," Willis said of Jackson House. "They are right here in Garland County, in our community."

This year Miracles From Matthew officially adopted Jackson House. Willis contacted Janie Smith, executive director of Jackson House, to find out what the Christmas program needed and they were able to fill in the missing items.

"This is going to be what we need to get us through," Smith said.

Since beginning distribution Dec. 14, Jackson House has already given gifts to 500 children. Smith said they estimated they will serve at least 750 children this year, distributing gifts through noon Saturday. Smith said the program has had a lot of participation from the community, but the gifts from Miracles From Matthew will help them finish out the season.

"No only are they Matthew's angels, but they are our Angels, too," Smith said.

Throughout the year, Miracles From Matthew also collects household goods. They hold a large yard sale to raise funds to purchase Christmas toys. They also partner with businesses, such as the McDonald's locations owned and operated by Celia Montgomery and Kristy Lopez-Allen, who put donation boxes in a combined 12 stores across the state.

Willis said volunteers are the backbone of the organization, noting without them none of their work is possible. Anyone who wants to donate or volunteer can find them on Facebook.

This year Willis estimated they will help around 950 children.