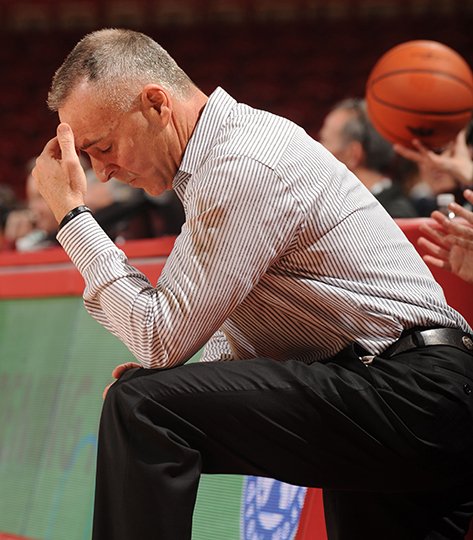 NWA Democrat-Gazette/Andy Shupe LONG DAY: Arkansas women's basketball coach Jimmy Dykes reacts to a turnover during the Razorbacks' 70-60 home loss Wednesday to Oral Roberts. The Razorbacks are 10-2 with one game left before the Southeastern Conference opener Jan. 1 at Ole Miss.

Without his sophomore point guard, knocked woozy during Sunday's victory over Northwestern State, Dykes' Razorbacks lost 70-60 to Oral Roberts on Wednesday at Walton Arena. Arkansas' next game is Wednesday against Houston Baptist before the Southeastern Conference opener Jan. 1 at Ole Miss.

Freshman Jailyn Mason filled in admirably for Monk on the point,scoring a team high 19 points with six rebounds and three assists and only one turnover playing the entire 40 minutes.

The Golden Eagles broke open an 18-16 lead into a 43-31 halftime cushion varying thereafter from 15 to eight points.

"We miss Mal from the standpoint that she's our quarterback," Dykes replied to a question about his point guard likely undergoing concussion protocol though Dykes declined publicly commenting specifically on her injury other than 'she took as hard a hit as I have ever seen on a basketball court and I have seen a lot of basketball.'

Mason did her best and that would have been good enough to beat most teams.

"Jailyn was terrific today in the point-guard spot," Dykes said. "Tremendous numbers for a freshman combo guard that had to play the entire game. But like any team, you lose your quarterback, it makes it tough. Hopefully we'll get Mal back right after Christmas."

By no means did Dykes blame the loss on Monk's absence as his Razorbacks dropped to 10-2 while Misti Cousins' Golden Eagles, of the Summit League, advanced to 9-5 against a gauntlet schedule including road losses at Iowa, Northwestern, Kansas, UALR and Arizona State.

Among ORU's nine victories are a 74-67 win at Big 12 power Oklahoma and a 22-point victory at Mabee Center in Tulsa over the Missouri State team that edged Arkansas 64-62 at home Dec. 11.

"I think ORU is real good," Dyke said. "They didn't catch us by surprise at all. They beat Oklahoma when Oklahoma was ranked No. 12 in the country."

"We knew Oral Roberts was a good team," Mason said. "Me and my teammates played as hard as we could but you could tell in those couple of (second quarter) minutes that we were getting outshot. It didn't go our way but I know that coach and I are proud of our team for fighting as hard as we could against that deficit."

Three consecutive Mason baskets gave Arkansas its last chance cutting the lead to 64-56 at 6:29, but when ORU senior guard Kaylan Mayberry scored to make it 67-56 at 4:56 Arkansas' fate seemed sealed.

"I go back to Kaylan's freshman year and it was one of her worst games ever when she played here," Cousins said. "So to see her maturity. It was a lot more difficult for her to come over here bearing the name of Mayberry then than it is now."

Lakota Beatty's 23 off the bench points, 10 that buried Arkansas during the second quarter, and forwards Maria Martinez, 15 points and six rebounds, and Faith Ihim, 10 points and seven rebounds, led ORU.

Arkansas had been outrebounding its opposition at plus 10.6 for 11 games but was outboarded 38-34 by ORU.

Cousins said the the Golden Eagles were inspired on the boards after getting outrebounded 43-16 in Saturday's 79-52 loss at Arizona State.

"We really lost it in the paint against Arizona State," Cousins said. "So having to face Jackson and Cooley in this game, that was a real focus for us both from our previous game and knowing how important those two young women are to Arkansas. I know coach Dykes' team is low on numbers right now. We went through the same thing with the injury bug our first semester last year. That's hard. So they were a little bit behind the 8-ball today."