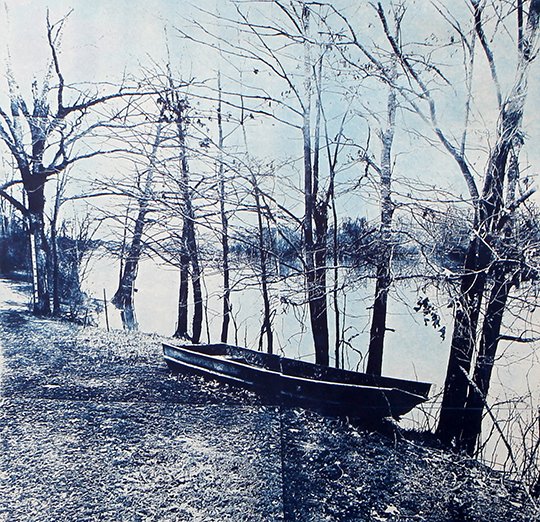 The Sentinel-Record/Richard Rasmussen QUIET IMAGES: Pieces from Hot Springs photographer and artist Beverly Buys' current project, "Delta In Blue," will be featured in the "Arkansas Committee Scholars" exhibit at the Butler Center for Arkansas Studies. Buys said she wants viewers to be able to see their own memories of the Delta in her work. 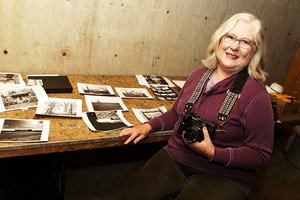 Local photographer Beverly Buys will be one of three artists whose work will be displayed at the Butler Center for Arkansas Studies in Little Rock as part of the Arkansas Committee of National Museum of Women in the Arts exhibit "Arkansas Committee Scholars" Jan. 13 through Feb. 10.

Buys was the 2016 recipient of the Arkansas committee's Artist Scholar Award, winning a $2,000 grant to use to further her work.

At the end of her term, Buys said she will give a presentation to the committee on how the money contributed to the art she created this past year.

Buys said she first learned about the scholar award 15 years ago when a friend won it. She was interested in applying for the award, but waited until she felt she had the right project.

That right project was "Delta in Blue," which she has worked on for the past five years. The project focuses on images of the Arkansas Delta within a 100-mile radius of Helena and West Helena. The 15-inch square photographs are done in cyanotype, which produces a blue print.

Buys' photos are shot on film and developed and printed by hand.

When she makes her trips to the Delta, Buys shoots agricultural landscapes, deserted buildings, churches and cemeteries, and anything that inspires her. She said she is "exploring the memory of the region," and is concerned about the region and its history.

They are "quiet images" without people in them, Buys said, noting she wants viewers to see their own memories in the images.

"To me, they are memories," she said. "I think of my grandparents and the stories I heard of the South."

She said her images are inspired by literature and music, especially the blues.

While she will display only eight of the current 45 images from the project for this exhibit, she said the photos are stronger as a whole group because they tell a story that identifies the place they are about. By the time the project is done, Buys plans to have 60 images. Her ultimate goal is to eventually create a book featuring the photos.

Buys will display 24 of the images during her upcoming show at Laman Branch Library in North Little Rock in April.

Over the years, as she has worked on the project, the images have changed with the different materials she has had available to work with. "The materials I use affect the image," she said.

She cited one year of the project where all the film she purchased had tiny light leaks in the packaging, resulting in a foggy edge to her photos. She said at first she was upset, but grew to love how the effect changed the image. She was disappointed when she couldn't get more film with the same defect.

Buys said her work process has a rhythm. She makes three to four trips to the Delta each year in fall, winter and early spring. She then develops and makes proofs of her work in late spring.

The summer is spent working with 15 to 20 negatives that she finds particularly interesting. The prints have to be created during the summer because she uses the sun to print her large images.

In Hot Springs, Buys' work can be seen at Justus Fine Arts Gallery. In Little Rock, her work is at McCleod Fine Arts.

In addition to Buys, the other artists whose work will be part of the exhibit are the 2015 Scholar Award recipient Robin Miller-Bookhout, of North Little Rock, whose medium is pastel drawing and painting, and Maxine Payne, of Greenbrier, the 2013 recipient whose medium is digital photography.

During the two months of the exhibit, the gallery will take part in Second Friday Art Nights from 5-8 p.m. Jan 13 and Feb. 10. Buys plans to attend the events to speak with anyone interested in her work.

Buys' advice to other artists applying for this or any other award is during the application to be direct, truthful and to clearly state the purpose of the project. She said she let the award committee know exactly why the project is important.

To apply for the 2017 Scholar Award visit http://acnmwa.org/scholarships/ and the application must be completed online on or before Feb. 1.