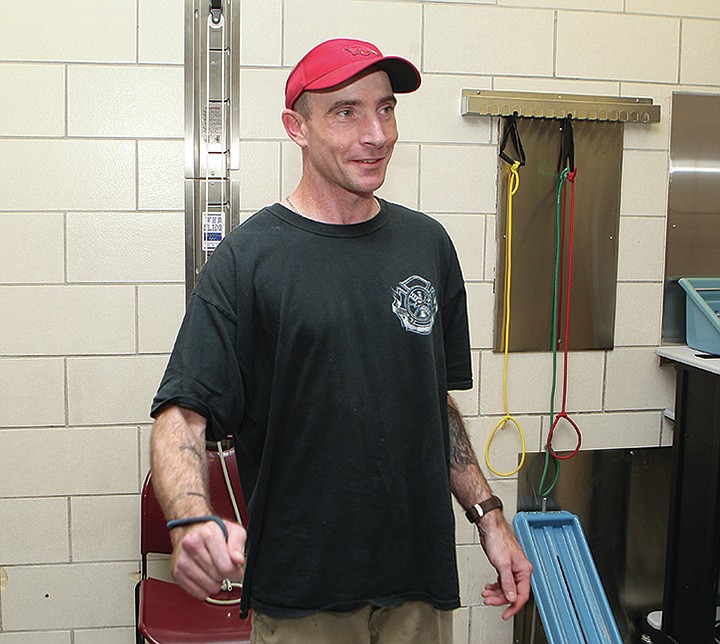 Billy Richardson, who suffered extensive injuries and broken bones throughout his body as the result of a motorcycle accident last year, credits Levi Hospital with his recovery.

Richardson began therapy at Levi Hospital in October 2015, after spending 64 days in the hospital. Leah Avery, physical therapist at Levi who worked with Richardson, said that when Richardson first arrived he was in a wheelchair and non-communicative. Avery was concerned he might require inpatient therapy instead of the outpatient therapy Levi offers, but decided to monitor his progress, instead.

At the time, Richardson said he felt ready to give up, but by the second session, he found hope that he would walk again. As of his last session at Levi Hospital, Richardson cannot only walk, but is driving again.

"They had me do different things and kept motivating me," said Richardson. He said Avery and his occupational therapist at Levi, Jeremy Rawls, guided him and motivated him in his recovery.

Richardson said he had tried therapy at other locations, but the others were not as good as Levi. He said Levi was the first to actually work his entire body and get him to stand.

Before the accident, Richardson was a lieutenant in the Lake Hamilton Fire Department. He said that while he knows he may never be 100 percent again, his goal is eventually to get back to work with the fire department.

In addition to his therapists, Richardson also gets his motivation for recovery from his 9-year-old son, Ethan, who calls to check on him. When he doesn't feel up to the work, his son keeps him going.

"I want to thank Leah and Jeremy. If not for Leah, I would have given up," said Richardson.

After completing his last therapy session in mid-January, Richardson said he planned to continue working on his recovery on his own by purchasing membership to Levi. Avery said memberships are available for patients with approval from their therapists who have completed their course of therapy to continue to use the therapeutic pool and therapy equipment.

Avery said people like Richardson are the reason she and Rawls do what they do. She said his hard work is what made his recovery possible.