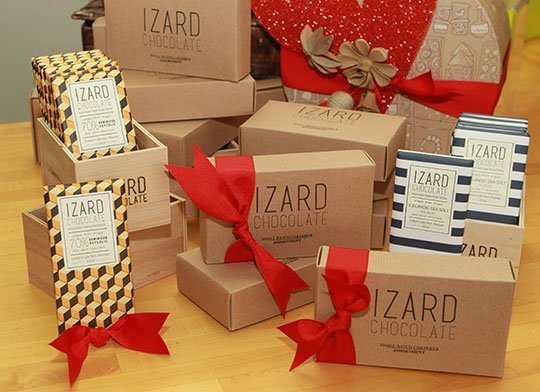 The Sentinel-Record/Richard Rasmussen DELICIOUS DISPLAY: Izard Chocolate Company products are on display at the Savory Pantry in anticipation of the chocolate tasting event on Feb. 6.

Chocolate lovers will get the chance to taste the offerings of the only craft chocolate maker in this area of the state at the Savory Pantry next weekend.

Nathaniel Izard, owner of Izard Chocolate Company in Little Rock, will be at the Savory Pantry, 214 Central Ave., from 9:30 a.m. to 2:30 p.m. Feb. 6 to answer questions and give out samples of his "bean to bar" chocolate.

"Bean to bar" refers to the fact Izard is involved with every step of the process from selecting beans to pouring each bar of chocolate, according to Keely DeSalvo, owner of the Savory Pantry.

Izard said he is excited for the opportunity to talk to people about his chocolate and the process he uses to create it.

He said his chocolate comes from high-quality suppliers from countries including Tanzania, Belize and the Dominican Republic. His cocoa beans are roasted and ground with granite stones. The only other ingredients added to Izard's basic bar are organic sugar and vanilla beans. During the tempering process, he adds the ingredients that go into his flavored bars. Izard said he creates his own chocolate instead of working with pre-made chocolate because he wants a pure final product.

DeSalvo said that about a year ago, shortly after Izard Chocolate launched, she read an article about the company and thought Izard's product would make a perfect addition to the offerings at Savory Pantry, which specializes in "small batch, thoughtfully produced food" and gifts at their stores in Hot Springs and Saratoga Springs, N.Y. DeSalvo contacted Izard and they did their first tasting at the Savory Pantry.

"He is a prime example of the kind of producer we like to represent," said DeSalvo.

Izard said he started his company after quitting his job and traveling. As a hobby, he tried chocolate making, but learned he couldn't just go to the store and get the ingredients. He researched the chocolate-making process and became fascinated with it.

Izard said he enjoys having his products in the Savory Pantry it is "very supportive," and he wants to work with people who truly understand the quality and uniqueness of the product.

The Savory Pantry's motto is "every taste tells a story."

During the event, the Savory Pantry will hold a drawing to give away a gift basket, and there will be samples of other products available throughout the store.

DeSalvo said the event will also be a great time to put together custom gift baskets of chocolate and other items available at the Savory Pantry.

"It will be a great time to shop for your Valentine and get a unique gift," said DeSalvo.