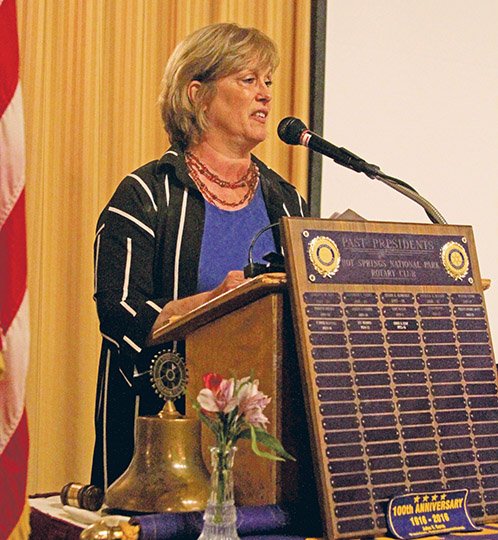 Calling it "one of the most iconic arts events of the southern and mid-america regions," Courtney Pledger said Wednesday the 25th annual Hot Springs Documentary Film Festival will have something for everyone this year.

Pledger, executive director for the HSDFF, and Ray Dillon, president and CEO of Deltic Timber, the HSDFF's Exclusive Presenting Sponsor, spoke about the festival, scheduled to run Oct. 7-16, to members and guests of the National Park Rotary Club during the club's weekly meeting at the Arlington Resort Hotel & Spa.

Dillon said the company is proud to be a part of Hot Springs, noting Deltic sponsors many events, but he has "never felt more welcomed and appreciated at any event," which is part of the reason the company chose to sponsor the festival again this year.

Deltic also wants to be associated with the film festival because of its stature as an Oscar qualifying event, Dillon said, noting, "It demonstrates everything we want to be a part of."

Pledger took the opportunity to thank Deltic for their support and thanked the Arlington for being the host sponsor, Bob Martorana, Don Gooch, board chair, and Dorothy Morris, for her dedication and vision for the festival.

Pledger gave a brief history of the event, describing how 25 years ago Sy Gomberg, head of the documentary branch of the Academy of Motion Pictures Arts and Sciences, visited Hot Springs. While strolling down Central Avenue, looking at the bath houses on his way to the Malco Theatre, he said there should be an all-documentary film festival in Hot Springs.

The Hot Springs arts community took up the idea and the HSDFF was born. It was the first all documentary festival in North America, according to Pledger.

She said a year after the festival began, James Earl Jones predicted that as documentaries grew in popularity, the Hot Springs festival would remain "one of the genre's most important venues."

In 2013, the HSDFF was designated by the Academy as an Oscar qualifying festival for documentary short subject, making the winner of the Spa City Best Documentary automatically eligible for the Oscar long list. She said HSDFF is one of only 38 festivals worldwide to get that honor.

"If you have an area of interest, you will find a film that speaks to you," Pledger said.

Pledger also talked about things that have happened at previous festivals she will never forget, including seeing Glen Campbell's family sing "Amazing Grace," Muhammad Ali's daughter and grandson telling stories about him and seeing the grin on Star Trek star George Takei's face when he accepted an Arkansas Traveler Award.

After showing a short video of previous festivals, Pledger opened up for questions from the audience.

In response to one question, she said they do not know which film will be featured on the opening night, but they will be locking in the schedule over the next several weeks.

Pledger said to watch for the announcements of special guests and films.