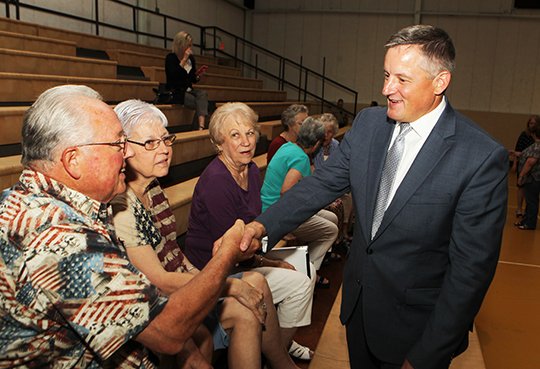 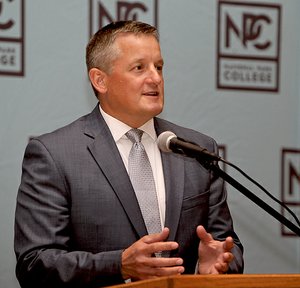 The college's Adult Education Workforce Alliance for Growth in the Economy program, known as W.A.G.E., invited Westerman to be a special guest speaker for the advisory committee meeting in the Fredrick M. Dierks Center for Nursing and Health Sciences. He spoke for about an hour after the meeting in the gymnasium for the NPC Wellness Center.

The congressman recently took part in a nine-day trip to seven countries in the Middle East and Eastern Europe. The trip was originally scheduled for June, but was rescheduled for last week.

Westerman said after the meeting that he would have attended the Republican National Convention if not for the trip. The Republican convention was held July 18-21 in Cleveland, Ohio.

The delegation traveled to Israel and nearby countries. Westerman said he was impressed by Israeli Prime Minister Benjamin Netanyahu, but they also met with Palestinian leaders.

They visited a refugee camp of about 80,000 refugees near the Syrian border. Westerman said the camp provided few amenities.

"I knew it was on the docket and it was something I wanted to see, but until you get there, you really can't imagine what it's like," Westerman said.

Westerman said the refugees he spoke to did not want to move to the United States. He said they wanted to return to their homes and live normal lives.

He explained how forces in Syria include government military, rebels and the Islamic State, which is referred to now as a "Daesh."

"It's an Islamic caliphate, which means it is borderless," Westerman said. "Their plan is for it to expand to all parts of the world. They literally want to rule the world with their misguided ideas."

Westerman said the U.S. is an example of the human rights governments should provide their citizens. He said human rights are low priorities for countries like Russia and Iran, as well as the Islamic State, which is also known as ISIS or ISIL.

Westerman said many leaders throughout the world fight to gain more power instead of fighting for their people. He said the U.S. does not need to police the world, but it should work with its allies.

"They'll do what they can to police themselves, but it means so much to have the United States have their back," Westerman said.

The delegation also traveled to the eastern European nation of Georgia, where Russian military forces have slowly encroached and retaken Georgian territory. Westerman said Americans are blessed to not face the same dangers.

"Nobody is going to come and move the borders of the United States and get away with it," Westerman said.

Westerman said the dynamics were noticeably different in Romania, where the U.S. deployed advanced anti-ballistic missile defense weapons. He met an Arkansan deployed there and learned the weapons were built in Camden.

"(Russian President Vladimir) Putin is prodding and probing and looking for soft areas where he can advance and stir things up," Westerman said afterward.

Westerman said he was proud to learn how Arkansans have contributed. He said he gained a better perspective into the lives of servicemen and women deployed in the region.

"It was a great opportunity to get out and see things that, at least for me when I was standing there looking at it and talking to the people involved, it's a whole different perspective from when you are reading a briefing on it or trying to follow it in the news," Westerman said.

Questions have recently been raised about Republican presidential nominee Donald Trump and his possible ties to Russia. Trump has made various comments with favorable assessments of Putin's actions.

American intelligence officials reportedly have "high confidence" the Russian government was responsible for a cyber attack that stole and released emails and documents from the Democratic National Committee. Trump remarked on Wednesday he wished the Russian government would unearth the missing emails of Democratic presidential candidate Hillary Clinton; on Thursday, he said he was being sarcastic.

"With this administration's action, it is hard to not be the pot calling the kettle black when you're telling somebody else to stay out of our elections when we've already been tinkering with other countries' elections. Elections are for the citizens and the government of the country that is involved and others should not be involved in that. And no, I don't think Russia should be taking a position or having any kind of action in any U.S. election, nor in any other country."

Westerman said he has gotten to know Paul Ryan, speaker of the U.S. House of Representatives, well during his time in Congress. They worked with other House Republicans to put a plan together for the future of the country.

Westerman said he has been pleasantly surprised by the abilities and character of his colleagues. He said internal and external polls revealed representatives' were concerned about the same issues as their constituents.

National security and the economy were two of the top issues raised in the polls. Westerman said he believes business and industry is overregulated.

"Reagan said it in the '80s, he said we declared war on poverty and poverty won," Westerman said. "But we've still continued down the same path ever since then."

Westerman said he was proud of the work of programs like W.A.G.E. and state entities like the Arkansas Department of Career Education in developing the workforce. He toured the Ouachita Job Corps program Thursday morning in Royal with Maj. Gen. Mark Berry, adjutant general of Arkansas.

Berry heads the Youth Challenge program for the National Guard at Camp Robinson in North Little Rock. Westerman said the program has a similar mission to Job Corps.

"They are in a position over there where they are needing some new space and some renovations on the facilities at Camp Robinson," Westerman said. "He had seen in the news where the Job Corps facility was closing here."

Westerman toured the Youth Challenge facilities Tuesday and brought a delegation on Thursday. Exploration of possible uses for the site are in the earliest stages of discussions.

"I think there is going to be some real synergies there if we can work out the details on there," Westerman said.

Youth Challenge is a National Guard program within the U.S. Department of Defense. Use of the Job Corps facilities would require cooperation among all three federal departments.

"The ball is rolling to look at all of those avenues and see if it is something that is feasible," Westerman said. "The governor's office was represented there. Sen. (John) Boozman is already aware of it. The governor is aware of it."