Bigger on the inside: TARDIS to land at library to promote Spa-Con 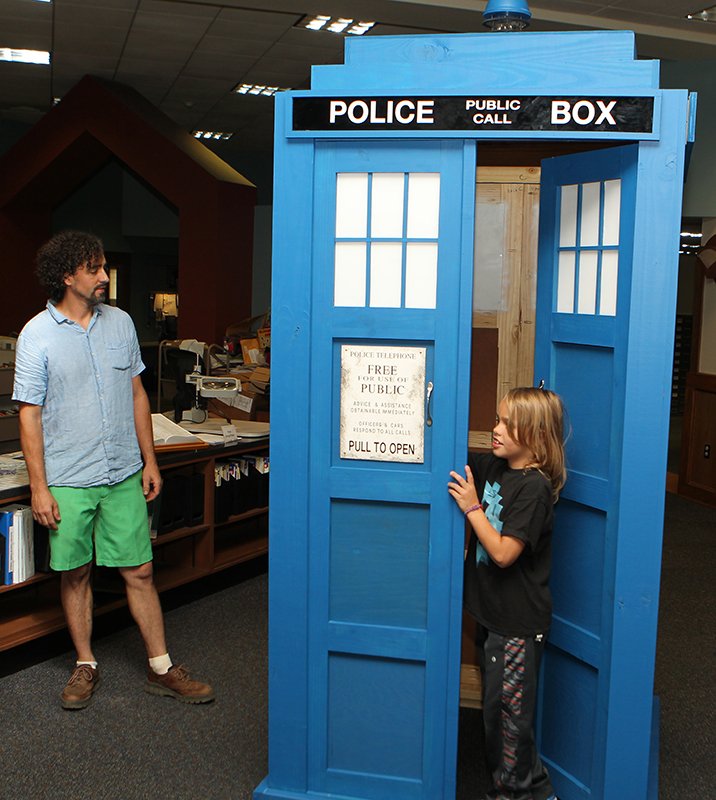 Fans of the long-running BBC sci-fi television series "Doctor Who" will get the chance to see a full-size replica of the show's time machine and spacecraft, the TARDIS, up close thanks to local artist Zack Dryden.

Dryden was approached by Bill Solleder, special events manager for Visit Hot Springs, about bringing the big blue police box to life to promote Spa-Con in September. He asked Dryden because the job required not only a skilled craftsman, but an artist.

Solleder said the TARDIS is an icon, and it moves, so it can pop up in different locations around Hot Springs until Spa-Con begins.

For the uninitiated, "Doctor Who" has been produced by the BBC since 1963, and revolves around a time-traveling alien called The Doctor. The TARDIS, an acronym for Time And Relative Dimension in Space, is his combination time machine/spacecraft. While it appears as a old-time police box on the outside, the running gag on the show is that it is "bigger on the inside," featuring a vast interior.

The official unveiling for Dryden's TARDIS will be at 6 p.m. Thursday at the Garland County Library. Other locations it may appear include Mid-America Science Museum, the Arlington Resort Hotel & Spa and in downtown Hot Springs during the Bar Trek Spa-Con event, according to Solleder.

"You never know where the TARDIS will be," said Adam Beck, IT manager for the library. "You don't always know what might be inside of it."

Dryden said the box breaks down into 17 individual pieces to make it easier to transport.

Building the TARDIS took around 40 hours, Dryden said. He created every element using a combination of new, upcycled and recycled materials. He found a design online to use as a guide.

"It was a lot of work, more than I imagined at the beginning," Dryden said. "I had fun doing it."

Dryden said he is a fan of "Doctor Who."

"I used to watch it with my dad and brother," he said.

He now watches the relaunched version of the show with his son, Ocean Dryden, who helped his dad paint the box.

A Hot Springs native, Zack Dryden is a member of the Dryden Pottery family. He started off as an artist creating pottery, but now works in a variety of mediums from painting to sculpture. He is the sole proprietor of Dryden Construction Arts, where he works on a commission basis. One of his specialties is elaborate tile work for custom showers. He has used his pottery skills to create his own tile.

In addition to the TARDIS, Spa-Con will feature other exhibits, including a "screen accurate" replica of the DeLorean from "Back to the Future," Beck said, and the van, Mutt Cutts, that appeared on screen in the movie "Dumb and Dumber."

Mary Neilson, cultural visitors liaison for Visit Hot Springs, said they will also have a replica of the "Star Trek" bridge and teleporter created by students at the University of Arkansas at Monticello Wesley Foundation with their director, Kavan Dodson, and the Rev. Brad Elrod, pastor of Star City First United Methodist Church. It was originally built for the Arkansas United Methodist Church Conference, but Neilson said the creators were happy to share it with Spa-Con's visitors.

Spa-Con, a multigenre comic convention, will be held Sept. 23-25 at the Hot Springs Convention Center.

"We are excited for new additions every week to Spa-Con, whether it is cosplayers or vendors, in addition to the special guests," Neilson said.

Print Headline: Bigger on the inside: TARDIS to land at library to promote Spa-Con