Battle of the Badges and more entertains at tub races 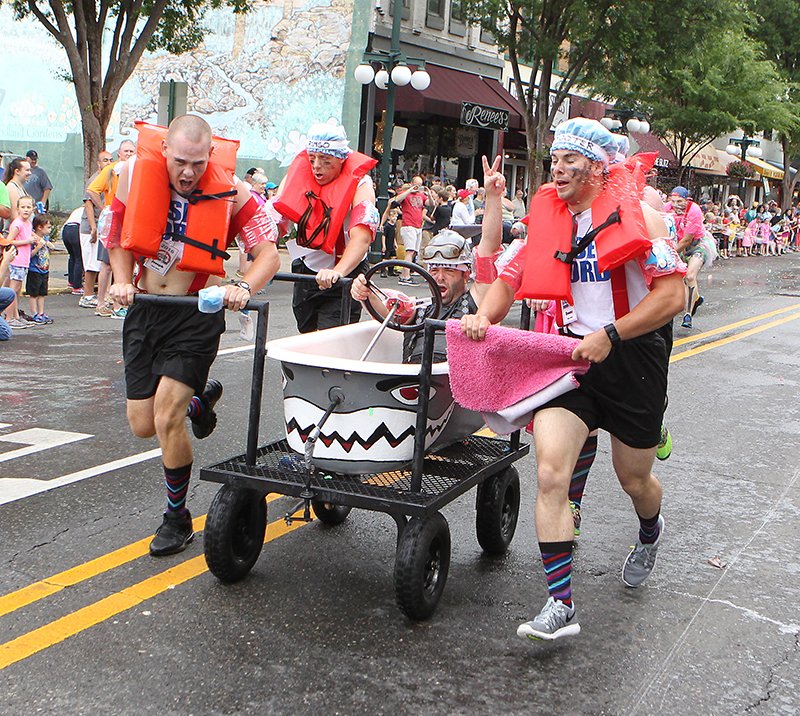 The Sentinel-Record/Richard Rasmussen WATER HAZARD: Members of the Riser Auto Tub team, from left, Clay Shatley, John Ringgold, Matt Barrett, in tub, Evan Dingler, right, and Tex Holmes, not visible in back, roll across the finish line to win the Traditional Tub division of the 11th Annual Stueart Pennington Running of the Tubs Saturday.

The Battle of the Badges was back on Saturday during the 11th annual Stueart Pennington Running Of The Tubs along Central Avenue in downtown Hot Springs, with a new competitor to join the fray.

The Hot Springs Fire Department, which won the battle by default last year because the police department did not enter the competition, successfully defended its title this year.

"It's always awesome beating the cops," said Kevin Ellsworth, captain of the fire department team, adding that the competition is really all in good fun. He also complimented the new competitor in the Battle of the Badges, the Arkansas Department of Correction -- Ouachita River Unit Emergency Response Team, and said he hoped they entered the race again next year. 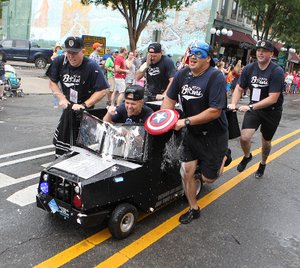 The Sentinel-Record/Richard Rasmussen ALL WET: Members of the Hot Springs Police Department Tub No. 1 team, from left, Joey Williams, Shannon Steed, in tub, John Hammons, Jjesus Anaya and Zack Rostan, win a heat in the Modified Tub division of the 11th Annual Stueart Pennington Running Of The Tubs on Saturday. The tub went on the win the modified division.

"It is the most heated rivalry in all of bathtub racing," said Steve Arrison, CEO of Visit Hot Springs, the sponsor of the race, which also serves as a fundraiser for the Downtown Association Christmas Tree Fund.

Arrison said he believes it was the most tubs entered in the event's history.

The family of the late Stueart Pennington, the namesake of the race, acted as grand marshals for the parade of tubs to start the event.

"He loved a good time so this is representative of his personality," said Jim Pennington, Stueart Pennington's brother.

The races consisted of three traditional tub heats and two modified tub heats, plus a final race for each. Along the race were three spots where the racers had to perform a task -- Ring Around the Tub, Bath Toss and Road Kill.

Bonuses were given to teams for including a Hot Springs National Park logo, having a live animal and a likeness of a superhero.

Spectators lined Central Avenue along the course, which ran from the front of the Arlington to the finish line at the crosswalk in front of the Exchange Street Parking Plaza, armed with water guns and water balloons to throw at the races and each other.

Arrison said what makes the running of the tubs different from other Hot Springs events is the crowd participation. He said he saw both small children and grandmothers throwing balloons.

"It was a great-looking crowd of all ages," Arrison said.

Kimberly Norris, of Hot Springs, attended the race for the first time with her children and friends to celebrate the eighth birthday of her daughter, Elivia Harmon.

"I loved it, and I want to come again," Norris said.

"It is so great," said Harmon.

Arrison said Mary Neilson, special events manager for Visit Hot Springs, and her team did a "great job" putting together this year's event, which couldn't have taken place without the Hot Springs police and fire departments.

He said this year's competition also drew a "great crowd" and "great contestants."

Print Headline: Battle of the Badges and more entertains at tub races