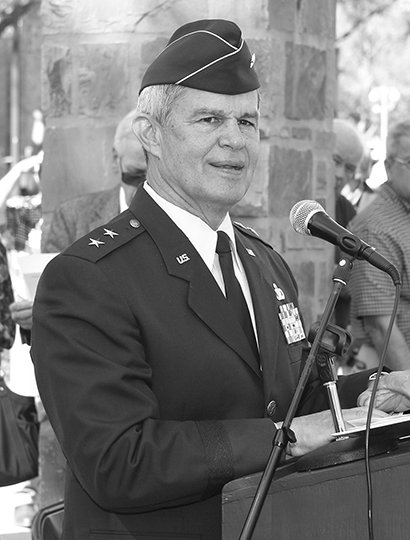 Services were held Friday for retired U.S. Air Force Maj. Gen. Allen D. Bunger, a local son who rose to achieve one of the highest positions of leadership in the U.S. Air Force.

Bunger was a familiar figure in Hot Springs, having provided the keynote address at the annual Veterans Day ceremony in 2010, and the Leadership Prayer Breakfast in 2007.

Bunger, who was born Sept. 23, 1944, in Bismarck, grew up in Jones Mill and graduated from Magnet Cove High School. He earned a degree in business management from the University of Arkansas in 1967.

According to his close friend, retired Col. Terry Thompson, Bunger felt a strong call to serve his country. After graduation, he went to officer training school and was commissioned as a second lieutenant on June 30, 1967.

"He never envisioned making a career of it, but ended up with as good a career as any officer could have had," Thompson said.

During OTS training, Bunger met his wife, Sarah. They have two daughters, Laura Callison and Shari Lapes, and six grandchildren.

With his degree in business, Bunger chose the budget and finance career field for his service. His career took him to Ramstein Air Base, in Germany, where he met Thompson, Langley Air Force Base, in Virginia, and the headquarters of the U.S. Air Force, in Washington D.C., among many other assignments over his 31 years of service.

According to Thompson, one thing that set Bunger apart was his ability to manage complex budgets during the post-Vietnam years when Congress did not wish to put as much funding into the military.

Bunger rose through the Air Force ranks until he reached the position of director of budget for the Air Force in 1992, which Thompson said is the highest rank attainable in Bunger's field. According to his biography, he was responsible for the development, justification and execution of the $72 billion Air Force budget. Later that year, he was promoted to brigadier general, and two years later was promoted to major general.

In 1995, Bunger was given his final assignment before retirement. He moved from the budget and finance field to take command of the Army and Air Force Exchange Service worldwide, the on-base worldwide shopping network for those two branches of the military.

He retired to Hot Springs in 1998 and built a home on Lake Catherine.

Thompson said Bunger's faith in God was more important to him than his military career. When he and his wife would get a new assignment, their first priority was to find a local church. Bunger was a member of Hot Springs Baptist Church, where he and his wife taught Sunday school.

He served in Recovery Point Ministry and Gethsemane House ministries, according to Thompson. He also worked with Cadence International, doing short-term missions working with active duty men and women.

"He had great integrity and the highest character of any one else I knew. In spite of his accomplishments, he was more humble than anyone I knew," Thompson said.