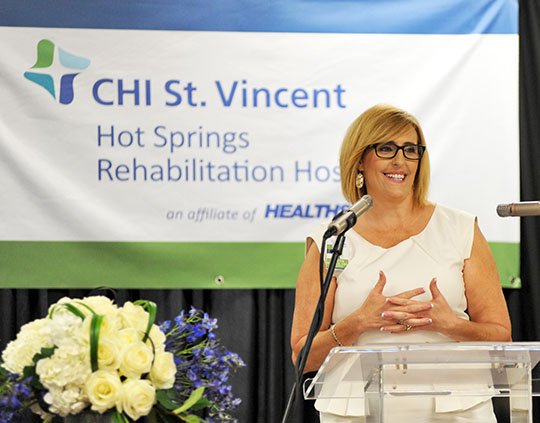 "It's no easy task to build a hospital," Janette Daniels, CEO of CHI St. Vincent Hot Springs Rehabilitation Hospital, an affiliate of HealthSouth, said Wednesday at the grand opening of the new facility at 1636 Higdon Ferry Road, which will begin accepting patients Friday.

Daniels said her hospital leadership team initially met "on the back deck of my house" for orientation and education in the early planning stages, noting, "We did not have a space at the hospital yet. We had no internet access there. But what we did have was a great view of the lake and a lot of excitement about what was to come. Well ladies, we've come a long way."

She said, "This team made sure that only the best of the best were hired in order to provide high-quality service for our patients. I appreciate all your hard work and dedication to our company's vision. You truly are servant leaders."

Daniels said as HealthSouth "started this journey" they quickly realized the significant need for acute rehabilitation services in the Hot Springs area and looked forward to working with CHI and the medical community to provide it.

Anthony Houston, CHI president, also thanked all those "who were instrumental in bringing this facility back to life," noting that, "Anyone who saw this facility in the interim, between when Mercy left and CHI came in, knew we needed to do something."

He said when CHI entered this market "we really took a look around, wanted to first and foremost bring this asset back to life. It's a great location and a valued part of what we want to accomplish in the community. There's a real need for rehabilitative services here."

He stressed that they had rehabilitation services at their main campus "for many years" but "our partnership with HealthSouth is rich and deep and goes back over 20 years in Little Rock and we're able to bring that expertise here."

Houston said opening the new hospital, and "off loading one of their units" into it, allows them to "go back into the main hospital and move some things around. To refurbish, redo and transform the main campus."

The new facility allowed them to expand from 27 beds to 40 beds so "not only are we bringing this campus back to life but we are renewing the main campus." 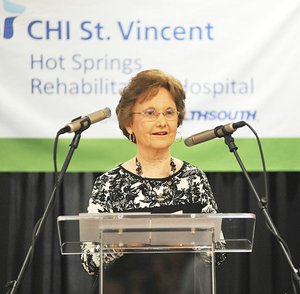 Photo by Mara Kuhn
The Sentinel-Record/Mara Kuhn SATISFIED CUSTOMER: Anne Dierks, of Hot Springs Village, speaks Wednesday at the grand opening of the new CHI St. Vincent Hot Springs Rehabilitation Hospital about her experiences as a rehab patient at CHI's main campus before its operation was moved to the new facility. Dierks, who is recovering from back surgery in March, said she excited about the new facility and "will recommend it to everyone I see."

Anne Dierks, of Hot Springs Village, a former patient of CHI, said after major back surgery in Little Rock in March she was brought to CHI for rehab. "I did not know what rehab was," she said, noting that her 13-year-old grandson had asked if she was "an alcoholic or a drug addict" because she was going to rehab.

"I learned a lot the first day I got here," she said. An initial evaluation involved her walking across the room and she noted "I could only take little tiny 2-inch shuffle steps with much pain." Only 12 days later, with the help of a walker, "I was walking so fast they said they couldn't keep up with me."

She said it happened because of the dedicated professional staff at CHI, including the doctors, management, nurses and especially the physical therapists. "They were respectful of my pain but encouraged me to do more each day. And it helped my progress. Why? Because they love what they do and they do it very well. It's not a J-O-B. It is truly what they love doing."

Dierks said they were "in a very small area" for her rehab so she was "very excited" for the new facility, noting, "Believe me, I will recommend this to every person I see."

Jay Grinney, HealthSouth Corp. president and CEO, said HealthSouth is "the largest provider of inpatient rehabilitative care in the United States" and "it's our privilege to be here in Hot Springs and to partner with CHI, to continue a partnership which goes back almost two decades."

He said it was symbolic of where the health care industry is going. "In the past, we all sort of got into our little silos and tried to do the best we could and compete with everyone else out there," but now the landscape was changing and "the best way to move forward is to partner with very strong, very capable, very deep partners."

Those in attendance at the opening, including U.S. Rep. Bruce Westerman, R-District 4, state Rep. Bruce Cozart, R-District 24, along with other dignitaries and officials, were also given technology demonstrations and tours of the facility.

Hillary Carnel, HealthSouth's communications manager, told The Sentinel-Record during a tour that of the 122 hospitals they had, "These are the biggest rooms I've seen so far," noting, "They completely gutted this building when they were rebuilding it."

She said 12.8 days was the average length stay for patients in their facilities, following their release from an acute-care hospital. She demonstrated some of the equipment in the spacious therapy gym, including a simulated vehicle that patients could use to relearn how to get in and out of the vehicle as well as operate the controls.

There were also rooms with a mock kitchen, dining room area, and washer and dryer, where the therapist could guide the patient through simulations of the day-to-day tasks they would be doing upon their return home.

"They even take patients for a mock shopping day" where they relearn the physical skills needed to put away groceries.

She noted that while it is exercise they try to make it enjoyable "so they want to come to therapy."