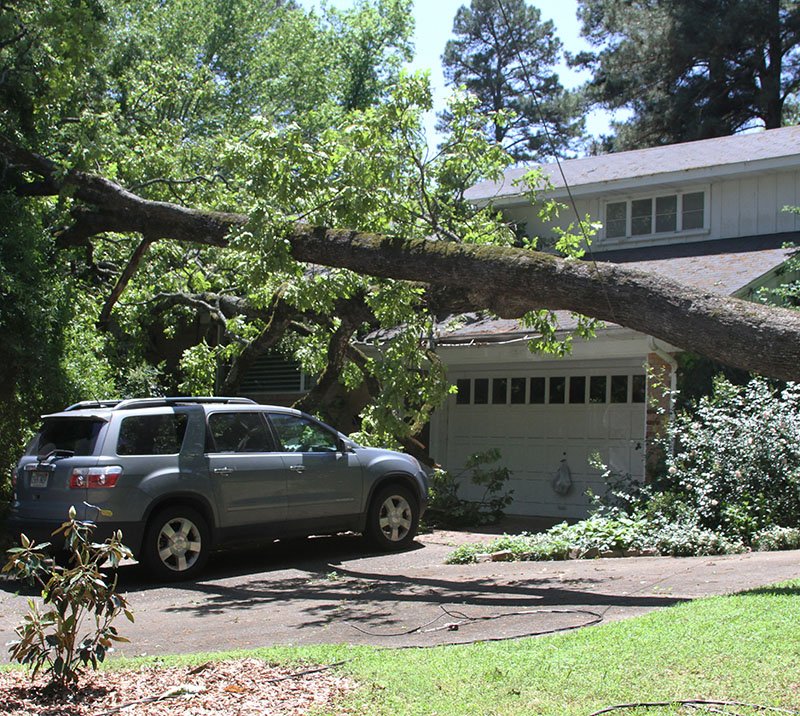 At 5:30 a.m. Saturday, Mary Lou DeBolt woke to discover a tree lying across the front of her home and on top of her vehicle, a result of thunderstorms that passed through Hot Springs the night before.

DeBolt said she knew something was wrong when her radio went off. She stepped outside to see if any of her neighbors had also lost power when she was met with the sight of the fallen tree.

Her home, which is off Prospect Avenue, has been without power since Saturday, waiting until she can get an electrician to reconnect the line running to her house that snapped when the tree fell. Entergy Arkansas Inc. came to her house to turn off the feed to the wire, which was lying on the ground.

She has also been without her GMC Acadia, which is underneath the tree, a problem she cannot resolve until her insurance company visits the house to survey the damage sometime between now and Thursday. She said she believes the company will be able to survey both the home and car at the same time. She planned to get a rental vehicle through her insurance company today once a rental company is open.

DeBolt said she has had people who were driving by stop to talk to her about removing the tree, including one person who said he would do it in exchange for the firewood, but they would not be able to remove the tree's root system.

Other than some obvious damage to her vehicle and the gutters on her house, DeBolt was unsure how much damage the tree had caused.

DeBolt said she is grateful for her neighbors who have gone out their way to help in her time of need. She said many people have come by her home to check on her and have brought her food. Several neighbors have offered to pick up whatever DeBolt needed while they were running their own errands. Other neighbors have opened up their homes to her so she can do things like charge her phone. Some have also offered to let her stay with them, but so far she is happy where she is.

DeBolt said she has been in the neighborhood since 1990 and in her current home for a few years.

"This is a wonderful neighborhood to live in. If you have a problem, they come to help," said DeBolt.