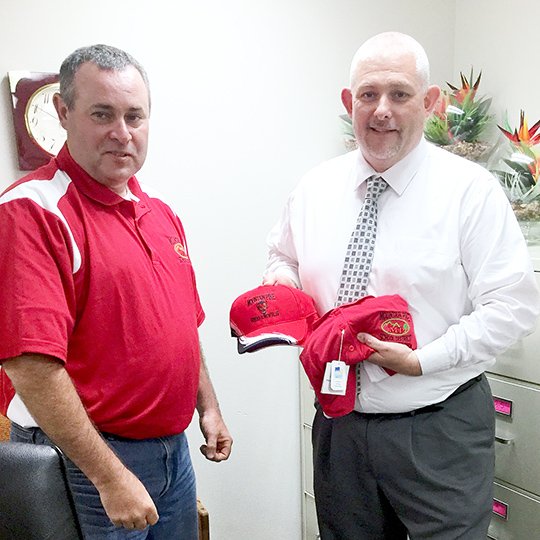 Submitted photo MP GEAR: Mountain Pine School Board President Tom Gould, left, presented Red Devil gear to Bobby Joe Applegate Monday after the board voted to hire him as the next superintendent. Bobby Gray will retire at the end of the school year.

Hiring the superintendent was the only action taken during the special called meeting. Tammy Brown's motion to hire Applegate was seconded by Michael Palmer.

Applegate will officially begin as superintendent on July 1 on a three-year contract at a salary of $88,000 with allowances for other costs, such as cellphone usage.

Board President Tom Gould presented Applegate with Red Devils attire after the meeting concluded. Applegate attended the meeting with his wife, Shelley, and daughter, Brooke.

Mountain Pine Superintendent Bobby Gray will retire at the end of the school year. The school board previously contracted with McPherson & Jacobson, an executive search firm, to conduct the search for his successor.

The firm received 28 applications and the board approved four recommended finalists. Interviews were conducted in late March and early April before the board decided to reopen the search and conduct the process without the firm.

"I just felt when the job came open this was meant for me," Applegate said. "I wasn't for sure the first time, but the second time it came open, I said I was going to apply that time."

"It was a close call between him and another gentleman," Gould said. "We felt like he was more fit for our school, not more qualified, but more fit."

Each candidate met with focus groups formed from students, classified staff, certified staff and administrators on April 29, May 2, Wednesday, Thursday and Friday. The school board conducted interviews in the evening on each day.

Board members met in executive session after each interview to discuss the status of the search. Applegate was interviewed Thursday and was already favored by the board, along with another candidate.

Gould said the board preferred Applegate's experience at a school of a similar size. The board did not meet in executive session Monday.

"We felt like we connected better with him on that and on certain things," Gould said.

"We gave him until Sunday morning to give him a chance if he wanted to back out or change his mind when we offered it to him," Gould said. "He called me first thing Saturday morning."

"This is a great area and I want to work here," Applegate said. "When they offered it, I accepted. I was ready to take it and I am ready to get started."

Applegate is originally from Dardanelle and graduated from Arkansas Tech University. He began his career in education at Centerpoint.

His experience includes time as a coach in football, basketball and track, as well as time as an assistant principal. He previously worked at Paris, Rector and Dewitt.

"I've got a few friends that work in the school system and they talk about how great of a school system this is," Applegate said. "That's what I want to be in -- a great school."

Applegate said Garland County appealed to he and his family as a destination for employment.

"I'm a big fisherman," Applegate said. "I love the lakes. There's so many lakes around here to fish. As a matter of fact, we spend a lot of our weekends in Hot Springs.

Applegate has spoken to the superintendent of Kirby about working at Mountain Pine several days before the July 1 start date to transition into the role. Gould say Gray will work through the end of his contract.

The family plans for Brooke to finish her last two years in high school at Prescott. Applegate would then be joined by his wife in Garland County.