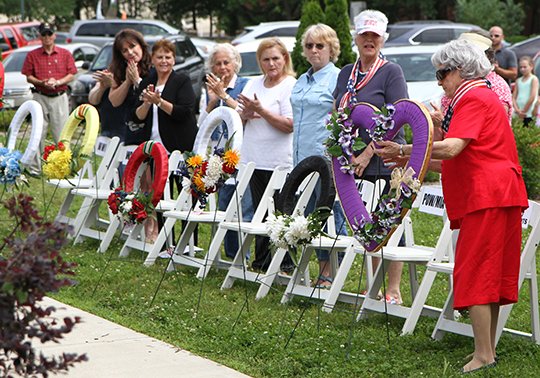 Veterans, families and friends gathered Monday at the Garland County Veterans Memorial and Military Park for the community's annual Memorial Day service to memorialize soldiers who lost their lives in combat. 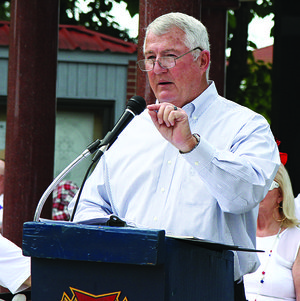 "As a flier, my heroes were always the aces," Mills said.

During his service, Mills acquired 3,300 hours in combat flying and 8,000 flying hours as a pilot in command. As a dual-rated, master Army aviator, he has experience flying 40 types of aircraft, including helicopters and fixed-wing craft, and is a veteran free-fall parachutist.

Mills is noted as one of the most decorated pilots of the Vietnam War. While serving in Vietnam, he developed several of the U.S. Army's air cavalry aero scout tactics, flying more than 3,300 combat hours.

"In Vietnam, my war, 1964-1973, not counting the French period of conflict there, a politically complicated event involving the United States initially in an advisory role," Mills said. "When the divisions went down on the ground in 1965, (the U.S.) took principal control of that conflict."

After 26 years of service, in 1993, Mills retired from the Army as a U.S. Army representative to the Federal Aviation Administration and served for 15 years as director of general services for the Cedar Fair Corp., which operates Worlds of Fun and Oceans of Fun in Kansas City. On April 19, 2011, Mills was inducted into the U.S. Army Aviation Hall of Fame in Nashville, Tenn.

He and his wife, Sharyn Lee, live in Kansas City, Mo., where Mills is undersheriff of Jackson County, Mo., and a 30-year-veteran of law enforcement.

Mills co-authored a book about his experiences in Vietnam, "Low Level: A Scout Pilot in the Big Red One."

"On this national holiday, each and every one of you have a friend, a loved on, a comrade, a classmate, that gave their life in service to this country," Mills said. "It is fitting today that we gather here to remember that sacrifice."