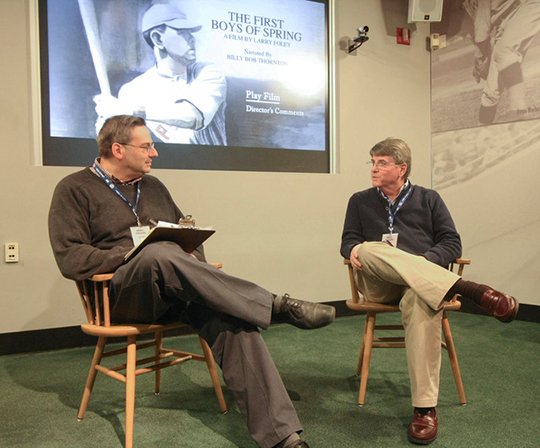 "The First Boys of Spring" shared honors with "Hano: A Century in the Bleachers" as the outstanding film among the 12 selected for screening at the festival, Visit Hot Springs said in a news release.

"Our film was by far the best of those shown at the festival," Mike Dugan, of Hot Springs, said in the release. Dugan was one of five baseball historians who supplied the background information on which the movie's script was based, and was in Cooperstown to participate in a panel discussion after the movie was screened at the festival.

"We drew the largest crowd on Saturday night, and we had by far the longest question-and-answer period. I think I may have had 15 questions," Dugan said.

"At the wrap-up on Sunday, the staff gathered and after a lengthy closed-door session they announced that our film along with the 'Hano' film were the outstanding films of the festival. I was given a small bat engraved '2016 Hall of Fame Film Festival,'" he said.

"The First Boys of Spring" was written and produced by Larry Foley, a journalism professor at the University of Arkansas at Fayetteville, and narrated by Oscar Award-winning actor Billy Bob Thornton.

The film premiered in Hot Springs a year ago at the 24th Annual Hot Springs Documentary Film Festival, and went on to win two Midwest regional Emmy Awards.

The film has also been broadcast nationally, and the release noted that Steve Arrison, CEO of Visit Hot Springs, received a message on Monday from a Singapore resident saying he had seen the documentary on Singapore television.

In addition to Dugan, four other baseball historians provided background information for the film: Bill Jenkinson, of Pennsylvania, Tim Reid, of Florida, Don Duren, of Dallas, and Mark Blaeuer, of Hot Springs.

Dugan is included in a group of historians who argue that Hot Springs was the birthplace of spring training. Cap Anson, the manager and Hall of Fame player for the Chicago White Stockings, which later became the Chicago Cubs, brought the team to Hot Springs in 1886 to "boil out" the winter -- it was the first time that a major league team had gone south for spring training, Dugan has previously said.

Dugan, a member of the Brooks Robinson-George Kell Chapter of Society for American Baseball Research, and Jenkinson first raised the possibility of creating a trail of sites related to spring training in Hot Springs. The trail was greenlighted by the Hot Springs Advertising and Promotion Commission in March 2011 and opened a year later.

The 29 stops on the Hot Springs Historic Baseball Trail include Fogel Field, also known as Fordyce Field, which was constructed in 1912 on Whittington Avenue by the Hot Springs Park Company to meet the demand of more than 250 major leaguers training in Hot Springs.