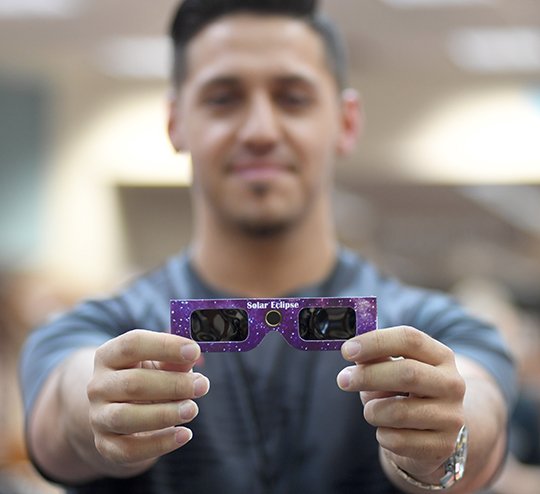 The Sentinel-Record/Mara Kuhn GLASSES RECALLED: Jacob Flores, an employee at the Garland County Library, on Tuesday displays a pair of the library-issued glasses that patrons are being urged not to use when viewing the partial solar eclipse on Monday.

The Garland County Library is urging patrons not to use the library-issued solar eclipse glasses to view the sun or the upcoming eclipse on Monday.

Amazon alerted the library over the weekend it has not received confirmation from its glasses supplier that the glasses came from American Paper Optics, the recommended manufacturer, and that the glasses may not be safe for use.

"When we ordered them, our programming librarian got them and they were from American Paper Optics, which is the recommended source. And a lot of places, like a lot of other libraries around the country, were ordering some to give away; they were really affordable and it was just something we could do. Well, we got an email over the weekend from Amazon saying that they can't confirm that those are truly from American Paper Optics," said Erin Baber, the library's public relations coordinator.

American Paper Optics has since released a photo instructing the public on how to confirm that their glasses are genuine.

"So, we got a shipment of fake glasses, basically," Baber said. "I'm glad that we found out when we did so we could try to get the word out. Don't use them, unfortunately."

Baber said the library ordered approximately 200 pairs of the eclipse glasses to provide the community an opportunity to safely view the solar eclipse.

"We had originally wanted to do a program around it but any time we have somebody do a program at the library we like them to have a certain qualification, and most of the people that we could contact were not going to be here because they wanted to be in the prime zone for seeing it," Baber said.

Many of the low-cost eclipse glasses sold through Amazon have been recalled.

"We're just really trying our best to make sure -- it was completely an innocent mistake. We couldn't have known and I'm really glad that Amazon did send that email. I've seen where some other libraries have commented (on Facebook) or emailed me directly that they've had the same problem," Baber said.

Visit the American Astronomical Society online at http://www.eclipse.aas.org/resources/solar-filters for a list of reputable eclipse glasses vendors.