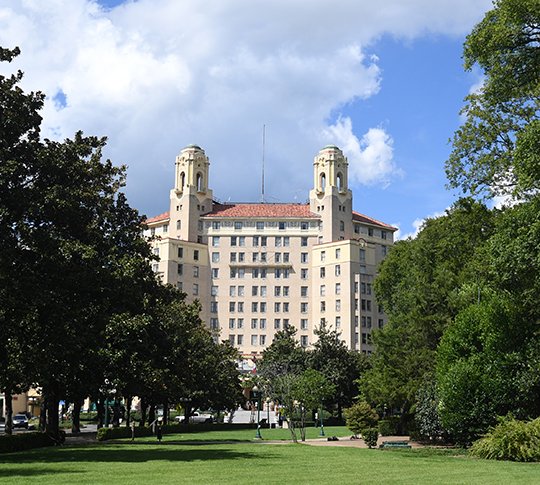 The Sentinel-Record/Mara Kuhn PUT ON NOTICE: The city has notified the Arlington Resort Hotel & Spa that it will close the downtown landmark if the new owner doesn't address ongoing maintenance issues.

The city has informed the Arlington Resort Hotel & Spa that safety concerns stemming from years of neglect will close the state's largest hotel if the problems aren't corrected by November.

An Aug. 10 letter from Chief Building Official Mike Scott to Arlington General Manager Bob Martorana set a Nov. 8 deadline and warned that the city will close the hotel if it's not in compliance by then.

In the interim, the city closed 47 rooms until safety violations identified during an Aug. 8 inspection are corrected, according to the letter. Scott said most of them involve the use of extension cords and faulty ground-fault-circuit interrupters that protect against shock when electrical items such hair dryers are dropped in water.

Scott said some of those violations have already been fixed.

The hotel was also informed it has until Sept. 1 to remedy numerous fire code violations revealed during the Hot Springs Fire Department's inspection of the property earlier this month. The violation notice listed more than 20 egress and fire doors that don't fit their frames properly, making them difficult to open and close.

Fire Chief Ed Davis said the inspection was a follow-up to the April inspection the department conducted after it received a complaint.

"The Arlington is almost 100 years old, and it's at a point now to where the level of maintenance that is going on isn't keeping up with the deterioration," said Davis, explaining that temporary fixes are no longer sufficient for the building to maintain an effective fire-defense system.

"We're not trying to throw rocks at anyone. That's just the way it is," he said.

"The amount of maintenance needs to be more of a permanent nature and not so much of an episodic nature."

Problems with the exterior of the building detailed in an engineering report the hotel commissioned last year in response to the city's June 2016 notice of unsafe conditions pose the most critical safety hazard, the city said.

It wants them corrected before the temperature drops below freezing, Scott said. The National Weather Service predicts a 50-percent probability that the temperature will reach freezing by Nov. 8, according to the city's letter.

"The plaster is cracked and could come loose, especially during the freeze-and-thaw cycle this winter," Scott said. "There's bricks with cracks and separation that water can get behind. When it freezes, it causes things to heave outward. Some of this stuff could fall off."

City Manager David Frasher said the disrepair of the exterior forced the city to act.

"From a public safety perspective, the city doesn't have any other choice," he said. "From what I've been told, the previous owners stopped doing work on the building a couple of months before closing on the sale of the property. That's not uncommon, but by doing that, it cost valuable time before the freeze-and-thaw cycle.

"Public safety is our number-one priority. We take it very seriously."

The properties sold for a combined $5.03 million, according to deeds filed last month, and are securing the $5.6 million mortgage. Al Rajabi, whom a news release issued after the sale of the hotel listed as CEO of Sky Capital, risks defaulting on the debt if the hotel were condemned, according to the terms of the mortgage.

Rajabi is also listed as a general partner in Windsor Capital LP, which owns The Four Points Sheraton in Little Rock, and CEO of RA Hotel Investment LLC, which owns a Holiday Inn Express in San Antonio.

The city's letter to Martorana said Rajabi was made aware of the safety concerns before he purchased the hotel.

"No doubt the exterior issues pose a complex task to accomplish in such a short time," the letter said. "But the location and scope of the problems have been known for many months, and the new owner was also made aware of these problems in a meeting last spring. Under no circumstance will the public be exposed to potential hazard."

"Mr. Rajabi asked me yesterday to consider that public code enforcement efforts would make it more difficult for him to obtain financing for improvements," Frasher said in the email. "I advised him that we would be taking the necessary steps to enforce the code and to protect the building, notwithstanding his efforts to secure financing."

Scott said the Arlington Hotel Co., which now holds the mortgage on the property, spent about $600,000 fixing problems identified in the city's June 2016 notice of unsafe conditions. Several roofs were repaired, and the rotted wood decking around the pool was replaced with metal walkways.

Scott said he was uncertain of the cost required to bring the exterior up to code.

"It just depends," he said. "The cost of scaffolding and cranes could be quite expensive. They'll need them because the building is so large."

"They're in the wrong places," Davis said. "They were put in corners. Corners are dead spaces as far as air movement. We're not saying the alarms won't work. We're just saying they won't work as fast as they would if they were properly installed on the ceiling or the middle of a wall."

Problems with the standpipe system were also listed. It allows firefighters to access water when they are inside a building. Davis said the Arlington has a partial sprinkler system covering the areas along Fountain Street, the laundry and the wood-frame attic.

"There's continuing issues with different parts of the standpipe system," Davis said. "The Arlington's fixed some of them, but there's some rust and corrosion that needs to be fixed. All of these things are expensive. We certainly understand that. At the same time, it's a public safety issue."