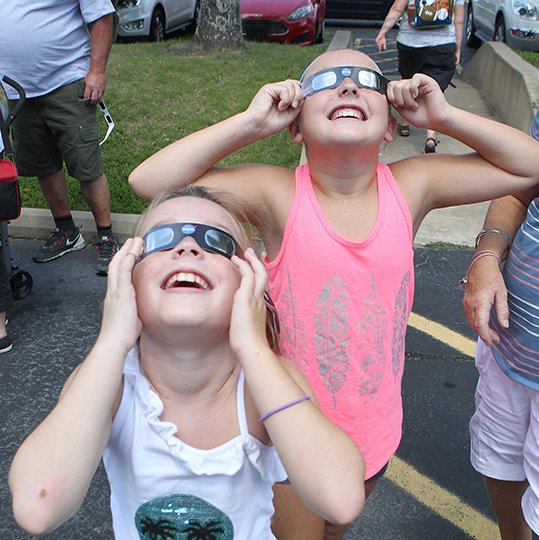 The Sentinel-Record/Richard Rasmussen WATCH PARTY: Samantha Sharper, 9, left, and her twin sister, Mallory Sharper, of Trophy Club, Texas, look up at the solar eclipse while attending a watch event at Mid-America Science Museum on Monday.

Garland County residents looked to the sky on Monday in hopes of getting a glimpse of the first full-blown solar eclipse to sweep the U.S. from coast to coast in nearly a century.

The Hot Springs area experienced a partial solar eclipse, which reached 85.6 percent totality at around 1:15 p.m.

As the moon's shadow was cast over Hot Springs, onlookers could be seen standing along Central Avenue and in business parking lots looking up through specialized glasses to view the celestial event.

Doug Herbert, Mid-America Science Museum's director of education, said the last total eclipse that was visible in the United States was in 1979.

"Now, the last one like this that was visible across the entire United States was in 1918," Herbert added. "And the last eclipse of any kind that we could see here in Arkansas was an annular eclipse and that happened in 1994. An annular eclipse is kind of a partial eclipse."

The museum hosted an eclipse watch party Monday during which it offered free admission between noon and 2 p.m.

According to Herbert, the museum hosted the only eclipse event of its magnitude in Hot Springs, and hordes of people from across Arkansas and surrounding states took advantage of the affair.

"This might be the only time in my life that I've been excited about it being a Monday," said Bryce Matley of Tyler, Texas, whose family made the trip to Hot Springs to view the eclipse.

"We really had no idea how many people to expect today. The big thing is that, because it is the beginning of the school year, we didn't figure there would be a lot of kids out. I suspected it was going to be busy because no one else is doing any kind of watch party in Hot Springs, so I'm not surprised that we have the crowds we have," Herbert said.

"There is no official way of really knowing (how many people attended). An eclipse around here is a rare event, so we didn't really have a way to predict this."

The museum provided complimentary solar eclipse glasses for guests to use, and according to Jim Miller, the museum's marketing director, 300 pairs of glasses were given out in just the first 10 minutes after opening. Guests also had the opportunity to make pinhole viewers in the museum's Alliance Rubber Company Tinkering Studio to use during the eclipse.

In addition to the regular snacks provided at the museum's snack bar, fresh grilled hamburgers and hot dogs were also available for purchase, and free customized shows about past, present and future eclipses and the science behind eclipses were offered in the Oaklawn Foundation Digital Dome Theater to visitors of the museum.

"Part of our goal is to make sure that people have a good understanding of science. Astronomy is actually part of the education department's core mission, so this is really exciting because it brings into consciousness things about astronomy and that gives us a chance to kind of help them out," Herbert said.

"Leading up to this eclipse there was a lot of bad information going around. For myself, it was annoying every time I would listen to a radio show or turn on a television, people would just give bad information and the nice thing about working here is it's given us a chance to give people good information. People can call up and learn the proper way to view an eclipse, the safe way to look at the sun or not look at the sun, and that kind of thing," he added.