Hale on track to reopen 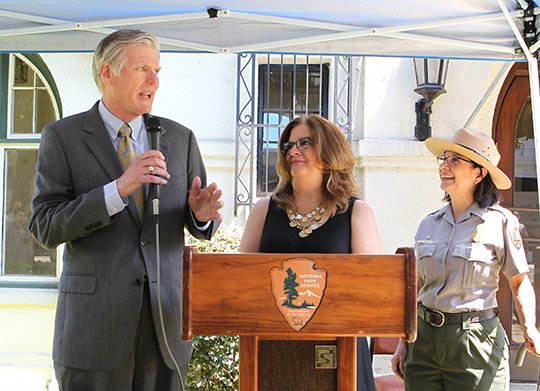 Hot Springs Mayor Pat McCabe and his wife, Ellen, signed a lease with the National Park Service on Friday to reopen the Hale Bath House as the first, and only, boutique hotel in Hot Springs National Park.

A public open house of the building followed the signing event to provide visitors an opportunity to see the building as it is before its transformation. Around 150-200 people attended Friday's event, which was held on Founder's Day, the 101st birthday of the National Park Service.

The McCabes submitted a proposal to the National Park Service to operate a boutique hotel, restaurant and conference/retreat center at the Hale.

Hot Springs National Park Superintendent Josie Fernandez introduced U.S. Rep. Bruce Westerman, R-District 4, and a field representative in the office of U.S. Sen. Tom Cotton, R-Ark., who thanked the McCabes and Fernandez for the work they are doing for the national park.

"Hot Springs has always been a leader. This is a good time for Hot Springs, as we're seeing a lot of development downtown. We continue to see more and more visitors come to Hot Springs, and it's because of work that's causing events to happen like what's happening today," said Westerman.

Westerman said that one bath house, the Maurice, remains available for occupancy on Bathhouse Row. The deadline for proposals is Oct. 31.

Pat McCabe expressed his gratitude to Fernandez for her support throughout the three years of lease negotiations.

"We had a few bumps in the road and she understood where we were at all times," he said.

"In September of 2013 I was a city director and I came home one day after a city meeting, or looking at some data that the city was getting, and I told El, 'If you want to go back downtown and get a business, you should do it now because things are going to start hopping,'" he said. "I don't know how I necessarily came to that, but look at what downtown is now, how it's developed in the last couple years. It's magnificent."

"When I first got here 13 years ago I took to saying that we would know what success would look like because we would have American flags flying again on top of all of these buildings," Fernandez said before presenting the McCabes with a folded American flag meant to be hoisted on top of the building after its reopening.

Ellen McCabe told The Sentinel-Record that she expects the remodel to take about five to six months, with a projected opening date slightly after the beginning of 2018.

The Hale will offer overnight accommodations with access to the thermal waters for each of the available nine rooms, two of which will be signature suites.

"The front is healthy, a young vibe in this room. Delicious, but healthy, more towards the healthy kind of things," Ellen said. "The backroom, it will still be healthy but it's more upscale."

She said that in addition to the hotel and restaurant, a juice and smoothie bar will also be installed inside the bath house, from which they will use fresh juice to make their cocktails and other items.

"My whole background is food service management. I majored in Foods and Nutrition in college and have been in that type of industry all along," she said. "The other part of it, the hotel part, we don't have a lot of experience but there's nine rooms so we feel like we can keep that under control and offer real customer service."