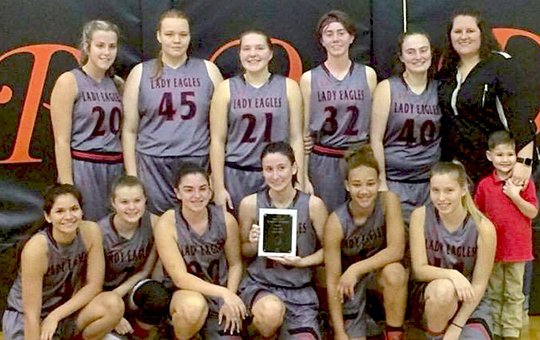 MAGNET COVE -- The senior high girls for Cutter Morning Star earned third place in the Magnet Cove senior basketball tournament Saturday with their second win over Rison in the week.

The Lady Eagles (4-4) started strong in the first quarter to take a 12-2 lead. Sophomore Sydney Keaton scored 14 points in the second quarter as the Lady Wildcats pulled to within 22-19 by halftime.

"We went box-and-one on (Keaton) in the second half to take the win," said Brittany Senn, head coach of the Lady Eagles. "Tyra Harris, a freshman, guarded her the entire second half, shutting her down."

Cutter Morning Star outscored Rison 10-9 in the third quarter. A 22-point fourth quarter allowed the Lady Eagles to seal the 54-37 win in the consolation game.

Their play in the tournament began on Monday with a 60-35 win over Rison behind 18 points from junior Cherokee Fields. She delivered a similar outing on Saturday with 17 points.

"It was a great effort and a great win for the Cutter girls' basketball program," Senn said.