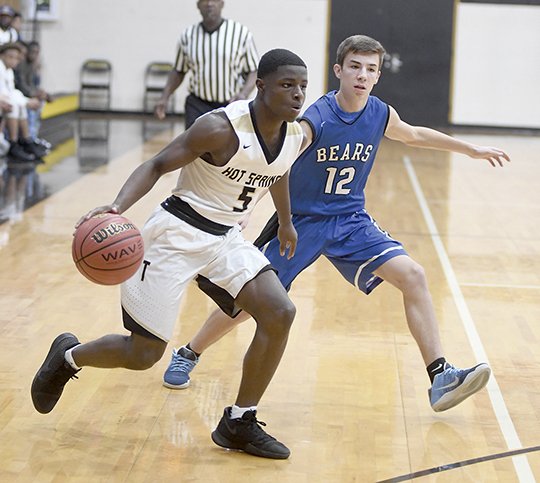 For the second time in as many games, the Hot Springs Trojans turned up their defensive intensity in the fourth quarter Friday night.

Clinging to a slim 36-34 lead, the Trojans (3-0, 2-0) held Sylvan Hills to seven points on just one field goal in the fourth quarter, pulling away for a 50-41 win in the Trojan Hoopfest at Trojan Fieldhouse.

"Our defensive effort is key for us and we were able to hold an athletic Sylvan Hills team to 41 points," Hot Springs coach Rodney Echols said. "We want to limit teams to 10 points a quarter and under 40 points a game. Right now, these guys have bought into our defensive schemes and they're figuring out that it's paying off."

Hot Springs stretched its lead to 43-34 early in the fourth, but the Bears trimmed the gap on the strength of their free throw shooting. Zion Butler and Jalen Ricks combined for six straight points at the line as Sylvan Hills pulled within 46-41 with less than two minutes to play.

The Bears got no closer, Payton Hayes and Eddie Miles scoring the game's last four points to set the final margin.

"These guys are grinders and they find a way to win," said Echols. "We're going to make mistakes, but those guys overcome them; they don't get down on themselves. There wasn't one moment tonight where I saw us hang our heads because we made a mistake or we missed a shot."

Both teams traded shots in the first quarter with neither gaining more than a two-point advantage. Sylvan Hills held a 9-8 lead after two ties and four lead changes.

The Trojans led by as much as seven in the second quarter thanks to a barrage of 3-point baskets. Hayes and Kaleb Hughley each buried two shots from behind the arc, while Miles knocked down one 3-pointer as Hot Springs took a 25-20 lead at the half.

"It's a different ballgame if we're not knocking down those shots; it changed the outlook of the game for us," Echols said.

Hayes stayed hot to open the second half, connecting on his third 3-pointer of the game to give the Trojans a 32-24 advantage midway through the third quarter.

"After you miss a couple and one goes down, then you start to get a little momentum and it gets easier," Hayes said. "Coach (Echols) is always harping on me that no matter how many shots I miss, just keep shooting. Once I hit one or two, I start to feel like I'm in a rhythm."

A basket by Curtis Frierson had Hot Springs in control with a 34-24 lead, but the Bears refused to back down. Alex Curry scored six points, sparking an 8-2 run to end the quarter as Sylvan Hills pulled within 36-32 entering the final frame.

With the game on the line, the Trojans turned to their senior leader to preserve the victory. Hayes opened the fourth quarter with a successful three-point play, scoring seven points in the period as Hot Springs pulled away for its third consecutive win.

"As the only seniors, I feel like me and Curtis Frierson have a big role as leaders, making sure the rest of the guys are in the right spots and knowing the plays," said Hayes. "Obviously last season, I wasn't scoring in big numbers, but the coaches were harping on me to get in the gym and get ready for some more shots. I got in the gym, and I now I feel confident that I can knock it down whenever I get a play set for me."

Hayes led all scorers with 18 points while Hughley added nine. Miles, Ramelo Cason and Santiair Thomas each chipped in with seven points to give the Trojans a balanced scoring output.

"Everybody is contributing, and you don't know what you're going to get from one person each and every night," Echols said. "That's what makes it fun for us and the kids. These guys are playing hard and challenging each other every day."

After closing the Trojan Hoopfest against Morrilton Saturday, Hot Springs resumes conference play Tuesday night in its first road game of the season at Lakeside.