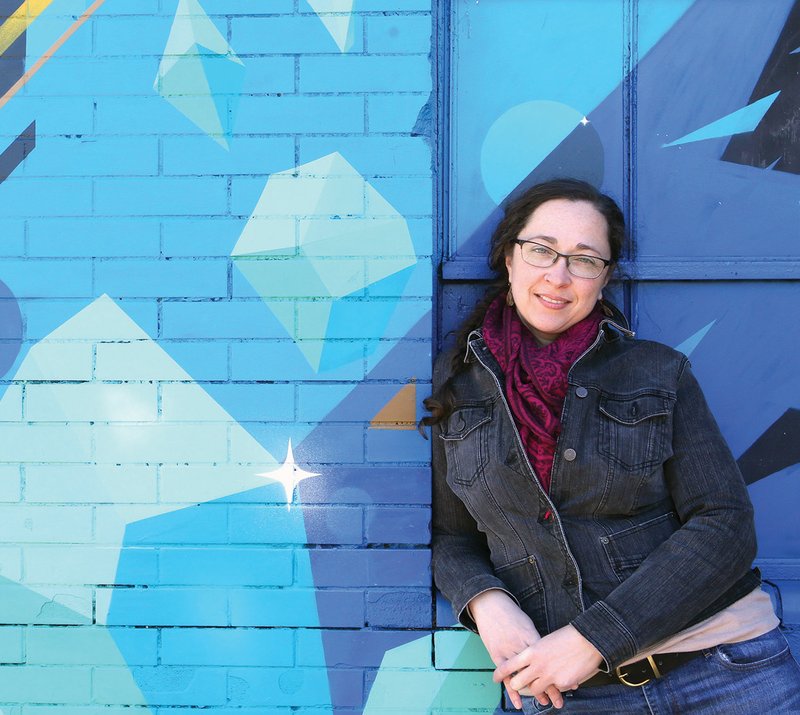 The Sentinel-Record/Richard Rasmussen ARTIST EXCHANGE: Hot Springs artist Erin Holliday has been chosen to participate in the first Sister City Artist Exchange between Hot Springs and Hanamaki, Japan. Holliday will spend one month in Hot Springs’ sister city following a monthlong visit to Hot Springs by a Hanamaki artist next spring during the Arts & the Park celebration.

Holliday will spend one month in Hot Springs’ sister city following a monthlong visit to Hot Springs by a Hanamaki artist next spring during the Arts & the Park celebration, the foundation announced in a news release.

Holliday said in the release that her upbringing in Hot Springs fostered an early love of the arts and community. She was an active participant in the arts as a teen, volunteering for arts organizations and frequenting gallery exhibits and poetry readings downtown. Her family was one of the early participants in the Sister City Program, hosting their first Japanese exchange student in 1994.

After graduating from Lakeside High School, Holliday relocated to Kansas City, Mo., where she received a Bachelor of Fine Arts from the Kansas City Art Institute. When pursuing a major in sculpture, she also studied modern Japan and Japanese literature as her interest in Japanese culture continued to grow. She is still an avid reader of Japanese literature, and the influence of the Japanese aesthetic can be seen in her artwork.

“Personally, I’ve been interested in Japanese culture for a long time so for me to be able to spend time in this culture that I’ve studied and had access to for, I guess 25 years, since we had our first exchange student, it’s kind of been a long time coming,” Holliday said Wednesday in an interview.

“But also, the Japanese aesthetic is very unique and as an artist and as a maker it’s something that I’ve been interested in visually, so being able to be around artists that live in that culture, are from that culture and formed by that culture, I’m really excited to see how not only my outlook on working with artists might change but really how my own personal body of work might change just by being in the landscape or just by being adjacent to these artists.”

Since returning to Hot Springs in 2010, she has led a multifaceted professional life balancing business, artistic, and community objectives. In 2012, she assumed the role of executive director of Emergent Arts, and led the organization through relocation and rebranding. Emergent Arts now serves emerging artists of all ages and abilities year-round in the areas of performing, visual, and literary arts education, as well as hosting community art exhibits and events. Her interest in community development has been fulfilled through serving on the city’s Community Development Advisory Committee, 2013-17, a recent appointment to the city’s Planning Commission, and the pursuit of Professional Community and Economic Developer certification through the Community Development Institute at the University of Central Arkansas.

In the release, Holliday noted the similarities between Hot Springs and Hanamaki and said she finds her authenticity among the mountains, trees and waters.

“This particular piece of the program, being new — we don’t really know exactly what the full outcome of the artist exchange is going to be but I think it’s particularly important because Hot Springs is known not only for nature but also as an art town, and when it comes to cultural assets our artists and what they produce are incredibly important to the identity of this town, so it’s nice that we get to actually share that with our sister city. We’ve shared students, we share our town when they come to visit, but this is a huge part of who we are,” Holliday said.

She said that the news that she was the first chosen to participate in the artist exchange program came as a bit of a shock.

“I was certainly excited and surprised because I knew some of the other artists that had been interested and definitely respect their work and what they do,” she said.

Professionally, Holliday has worked in many different capacities within the arts community, including professional curatorial art handling and installation, commercial and community gallery management, art consulting and historic restoration. Throughout Arkansas, she has been responsible for curating nearly 100 gallery exhibits, primarily composed of local community artists.

Having never traveled overseas before, Holliday said she feels nervous but mostly excited for the opportunity and looks forward to finding inspiration in Japan as a creator.

Noting the language barrier that may be present between her and the artists of Japan, Holliday said, “I know a lot of Japanese do speak English but it is different when you’re talking about communicating with people who speak your language as a first language. That makes me a little nervous but it’s also kind of exciting. I think there’s going to be a lot of comedic moments in it and probably some frustrating moments in it.

“I think especially because I’m going over there as an artist and as somebody part of an arts community, I think that some of that language barrier may be bridged a little bit because we’re going to be looking at and talking about and thinking about being creative, and sometimes you don’t necessarily have to have verbal language to do that.”

Holliday’s exchange visit is funded by the Sister City Foundation. Her homestay with a family in Hanamaki City is an integral part of the overall exchange experience.