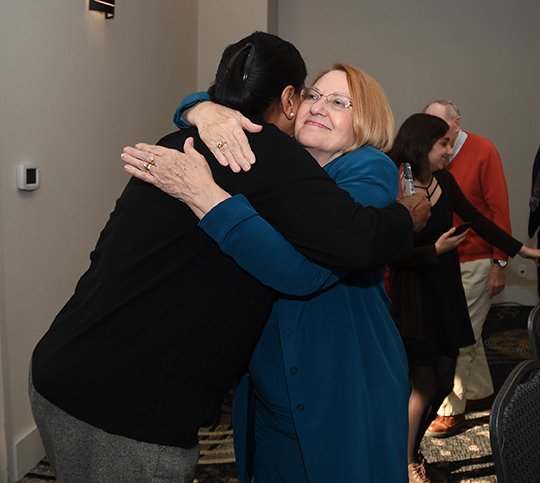 The Sentinel-Record/Mara Kuhn FAREWELL: Debbie Ugbade, left, hugs Jane Browning during the United Way of the Ouachita's annual meeting and awards banquet on Thursday at The Hotel Hot Springs & Spa. Browning is set to retire as executive director at the end of December.

As United Way of the Ouachitas celebrates its centennial year, the nonprofit's executive director Jane Browning prepares to bid farewell after three years of service to the organization. She is set to retire at the end of December.

Browning has worked in the nonprofit sector for 45 years, having lived and worked across the country from Maryland to Washington, D.C., to Chicago to Denver to Omaha.

During her three years with United Way of the Ouachitas, Browning was instrumental in implementing a number of programs and strategies to tackle some of the community's key issues.

In 2015, she, along with United Way's board of directors, implemented a yearlong broad-based community assessment to get to the root of some of Hot Springs' problems. The organization then adopted a three-year strategic plan focusing on community impact on issues addressing childhood poverty, which was found to be one of the major issues in the city.

Browning said the board will reevaluate at the end of the three years to decide what the next step will be.

United Way of the Ouachitas Resource Development Director Sarah Fowler is Browning's successor. Fowler will start out the new year as the new executive director.

The organization held its annual meeting and awards banquet on Thursday at The Hotel Hot Springs & Spa, featuring Eric Jackson and a special tribute to the community volunteer service of Terry Wallace. The event was sponsored by Oaklawn Jockey Club.