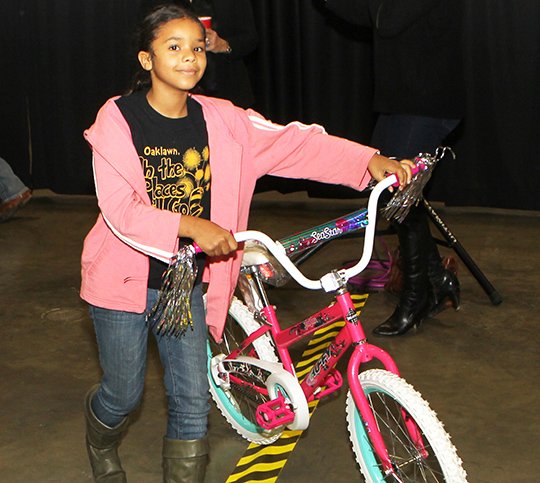 The Sentinel-Record/Richard Rasmussen WINNER: Jalissa Davis, 10, of Hot Springs, is all smiles after winning a bicycle at the 32nd annual Christmas for Kids event at the Hot Springs Convention Center on Thursday.

Santa came early again this year for some of the community’s children at the 32nd annual Christmas for Kids event, held Thursday at the Hot Springs Convention Center.

What started with 40 children at City Hall over 30 years ago has now transformed into a holiday tradition in Hot Springs that provides Christmas gifts to hundreds of children each year.

Christmas for Kids was originally established by former Judge Earl Mazander, bondsman Bennie Hazen, and Earl Gill. Bruce Simpson, who has played the part of Santa Claus for the event for 19 years, said his aunt was a court clerk under Mazander and he became involved with the project through her.

“Then, as Earl left office and my aunt did, too, and as Bennie Hazen passed away, each municipal judge has picked it up since then,” Simpson said, adding that Hazen’s grandson, John Muldoon, and Garland County Circuit Court Judge John Homer Wright have “carried it on.”

“My wife, Sally, sings, and Judge Wright is a musician also. I’ve done a lot of production and sound and stuff, that’s really my forte, so it kind of fit that we were all people that shared the same interest for doing things for others, civic mindedness, and we’re entertainers. And I fit into the Santa suit, so I got the gig,” Simpson said.

Ordinarily, the event will draw 500-600 children, Simpson said, though this year numbers were down because of a conflict with local school schedules.

“It’s better than we thought it was going to be, but Hot Springs is not out of school yet,” Wright said. “We’ve arranged next year to hold the event on a Saturday because the same thing will occur. With Christmas being where it is during the week, they’ll probably have to go to school the entire week before that.”

Madeline Burch, 9, who said she has been on her best behavior all year, asked Santa for an easel and a set of paints for Christmas, and also hopes to see a new puppy or kitten underneath the tree on Christmas morning, a request to which her mother, Sandy James, said, “We’ll just have to wait and see!” 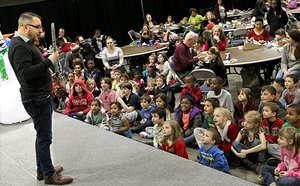 Upon arriving to the venue, children and their parents enjoyed a free lunch catered by Turf Catering, Christmas carols sung by Mustang Sally, and magic by magician Scott Davis. Davis has performed at the annual event for 12 years.

“I love to see so many people in the community coming together to help less fortunate people in our town. It’s a neat event and I want people to know about it,” Davis said.

After lunch, organizers drew tickets and 40 lucky ticket holders were given brand-new bicycles, followed by a visit with Santa for the children, who were each given a gift bag filled with toys including skateboards, stuffed animals, Nerf footballs, coloring books, model airplanes, and Slinkys.

Wright said funding for the toys comes from the community.

“I’m in the legal system and the attorneys have been traditional contributors, but there are people, businessmen from the community, that have made this one of their normal giving donations. The community has been very generous the last several years,” he added. “If you stay with us, you’ll see that for a lot of these kids, this is their Christmas. It’s just the best thing I do all year.”