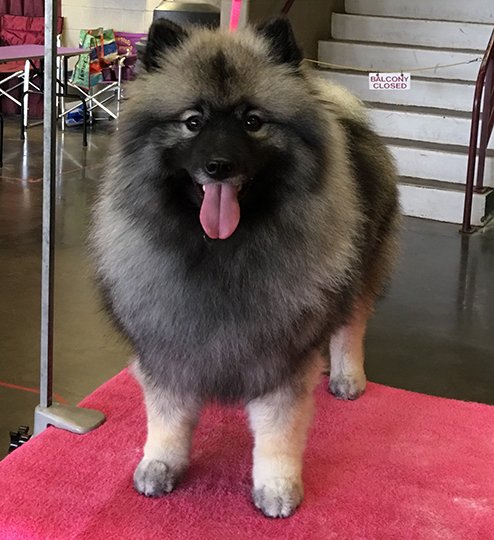 Submitted photo ON SHOW: Tipsy, a keeshond, will be taking part in Westminster's conformation competition Monday and Tuesday with her owner and handler Kelli Siekierski, a former Hot Springs resident and Lake Hamilton graduate.

Tipsy, whose registered name is GCHB CH Evolution Straight No Chaser, will participate in the conformation competition as part of Westminster Week on Monday and Tuesday.

Siekierski says Tipsy is close to the description of the breed standard for a keeshond, with dark almond eyes, ears that sit high on her skull, a "very intelligent" expression and a high tail that sets close to her back. Siekierski's favorite trait is Tipsy's coloring, which she describes as black and silver.

Siekierski, who now lives in Fort Worth, Texas, is a breeder, owner and handler and a member of both the Keeshond Club of America and the Heart of America Keeshond Club.

Born the only female in a litter of four on Dec. 28, 2014, Tipsy earned the final points needed for her American Kennel Club Championship at the Hot Springs Kennel Club Dog Show when she was only 9 months old. Siekierski said she knew Tipsy was special when a judge at the Hot Springs show told her he preferred Tipsy over the two male keeshonds she had brought with her, even though keeshond is considered a male-dominated breed.

Siekierski said the Hot Springs show is one of her favorites, noting she tells other owners about the show when she travels to other shows in Arkansas.

Siekierski said in a news release she considers herself a hobby breeder who only breeds keeshonds a few times a year. She said she only sells the puppies she does not keep to people who have filled out applications, and who would make good homes for the dogs.

She joked that it is harder to buy a puppy from her than it is to get a job. The money from the sale of the puppies goes to cover breeding costs.

The KCA rank was important to Siekierski, who had decided that she would only take a dog to Westminster if it was ranked in the Top 25 by KCA because Westminster costs three times more than a regular dog show.

Siekierski went to last year's show as a spectator to get a feel for what to expect for this year's competition because she knew Tipsy would make the Top 25.

She said she chose to breed keeshonds because, when she was a child, her family had a keeshond chow mix. When she started looking for a dog for her own family, she knew keeshonds were "very friendly, very outgoing and a good family dog."

She found a reputable breeder who convinced her to try showing. When she won her very first show in Dallas, she said she was hooked, noting she loves training the dogs and that working with each dog is always a challenge.

"It gives me something to set goals for," she said.

While she is trying to treat it like any other show, Siekierski admitted she is excited and expects to have more nerves. She said she will go through her normal routine to prepare Tipsy for the show.

"I am incredibly excited, anxious," she said. "I am prepared to go with Tipsy and even if we walk away with nothing, it will be fine."