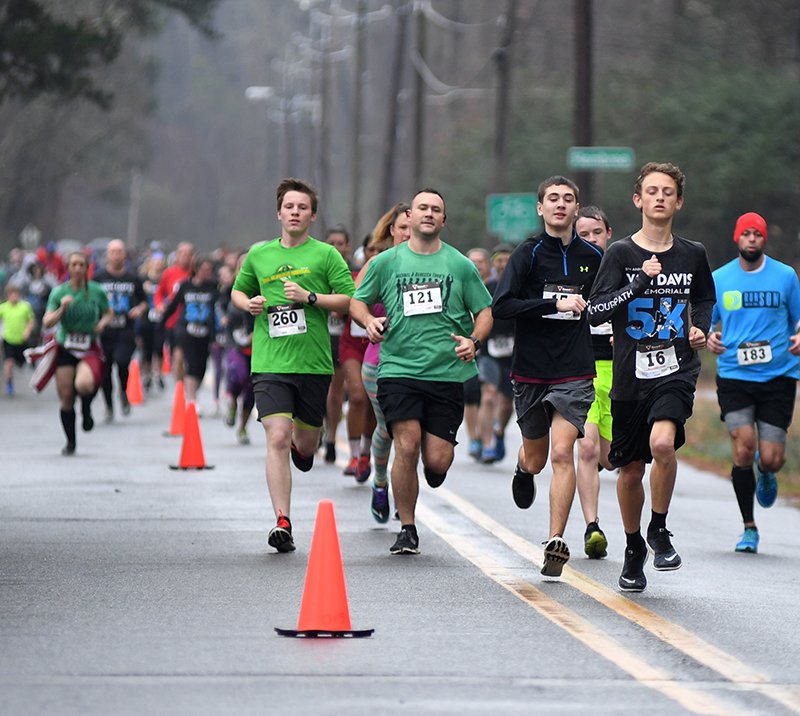 The Sentinel-Record/Mara Kuhn AND THEY'RE OFF: Runners make their way down Whittington Avenue Saturday morning to start the fifth annual Van Davis Memorial 5K Run/Walk. National Park College holds the event to honor the legacy of Van Davis, an original faculty member who taught at the school for almost 38 years.

National Park College's annual Van Davis Memorial 5K Run/Walk continues to be an appropriate testament to the life and passions of its namesake.

The first Van Davis race was held in 2013, less than a year after he died. Almost 500 participants attended the first event to help endow the Van Davis Memorial Scholarship fund.

The annual event has generated about $41,000 in proceeds and has allowed the NPC Foundation to provide six scholarships in Davis' honor. His widow, Charlotte Davis, has returned to Hot Springs every February to participate. 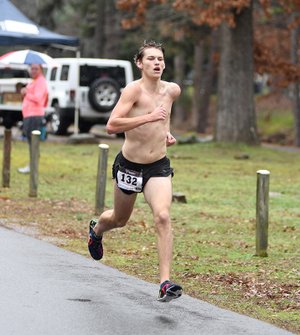 The Sentinel-Record/Mara Kuhn FOURTH STRAIGHT 5K: Jessieville High School junior Noah Eskew races toward the finish line Saturday morning to win the annual Van Davis Memorial 5K Run/Walk for the fourth time. Eskew said the event is one of 20-30 road races in which he competes each year.

"It means the world to me that they are keeping his legacy alive," Davis said. "The scholarship would just mean so much to Van, and it does to me too, because he spent a lot of time and effort trying to support students who could not afford to go to school.

"It's just great. My daughter and granddaughter are here this year, too. So that makes it extra, extra special."

Van Davis was one of the college's first faculty members when it opened in 1973. He taught history and political science for almost 30 years.

Davis was known as a demanding professor and a caring educator, often supporting students in financial need. Former students reached out immediately to the college and the foundation to praise Davis and to inquire about any opportunities to give back in his honor.

The college opted to hold a 5K to celebrate Davis as he was also known as an avid runner. He ran with the Little Rock Roadrunners Club and was a former president of the Spa Pacers.

Charlotte Davis said Janet Brewer, associate vice president for human resources, explained to her how community members, faculty, staff and students discuss her husband throughout the year as they look forward to the race. Children can also be involved with the introduction of the Fun Run before the 5K.

"It's great to see his memory alive," Davis said. "This community, running and the college meant so much to him. It was his home and he loved it here. He loved his students and he loved that college so much.

"I'm glad they are keeping it going. I don't care if 30 people showed up. I would still want them to do it."

The event can also attract competitive runners as the course around Baseball Trail Park (formerly Whittington City Park) was certified by USA Track and Field in 2014. Jessieville High School junior Noah Eskew won the 5K for the fourth time Saturday with a time of around 16 minutes. Eskew said it is among 20-30 road races in which he competes every year.

"It's just a good course," Eskew said. "A lot of people do not consider the hill at the end, but it really helps you push and get stronger."

Multiple recipients of the Van Davis scholarship were among hundreds of participants at Saturday's event despite an unexpected downpour. At least one scholarship is awarded each year to first-generation college students with a cumulative grade-point average between 2.0-3.5.

"What a great legacy for Van," Charlotte Davis said. "I love it."

The first two scholarships were awarded in 2014 to Sandra Escobar and Angelina Henry. They each received a $400 award.

Three $1,000 scholarships were awarded the next two years. Greg Lemons received the third scholarship in 2015. Amanda Poole and Kelley Ryals were chosen for the 2016 scholarships.

Rachel Garner became the sixth recipient this spring. She received a $1,500 scholarship.

Charlotte Davis spoke at the awards ceremony Saturday and presented medals to the winners. She and her daughter, Erin Davis-Shedd wore race No. 1 and No. 2 in the inaugural race.