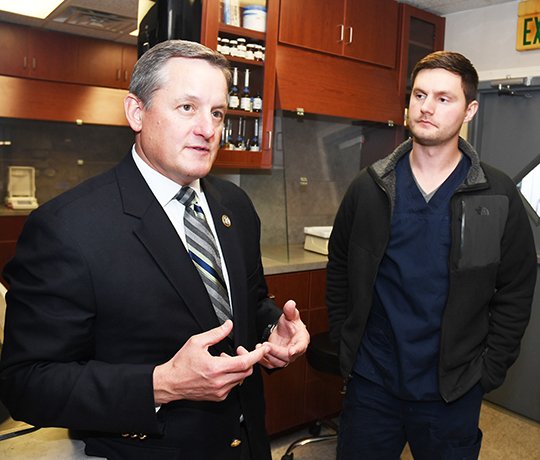 The Sentinel-Record/Mara Kuhn DROPPING BY: U.S. Rep. Bruce Westerman, left, R-District 4, speaks with Dr. Lance Smith, owner and pharmacist at Smith Drug and Compounding, and others during a visit Wednesday to Smith's business located at 1629 Airport Road, Suite D.

Republicans are working to "unwind" the Affordable Care Act as it exists, in addition to repealing it outright, U.S. Rep. Bruce Westerman, R-District 4, said Wednesday during a visit to a Hot Springs pharmacy.

"This was a huge issue right out of the gate and feedback like this is good to hear," Westerman said while talking with Dr. Lance Smith, owner and pharmacist for Smith Drug and Compounding, located at 1629 Airport Road, and Scott Pace, chief operating officer for the Arkansas Pharmacists Association, while visiting Smith's operation.

"What's happening here is what's happening all over the country," he said, as Pace and Smith outlined many problems pharmacies are facing with new regulations and changes that have taken place.

Westerman noted the House and Senate both passed a budget resolution last week to begin work on legislation to repeal major portions of the Affordable Care Act.

"We're trying to start unwinding and start putting better stuff in place," Westerman told The Sentinel-Record. "I'm an engineer and I like to think of it as taking it down to the foundation and rebuilding it and doing it with policies that are debated and not part of a multi-thousand page bill passed at midnight on Christmas Eve."

He said it was not a matter of Republicans not having a plan to replace ACA, but "we want to know what we're getting into before we vote on these issues. We want to go through and debate these on an individual basis and a lot of them have been debated over the years, but didn't get a lot of attention."

"The likelihood of it being put into law was very low with President Obama in office," he said.

He noted that Tom Price, President-elect Donald Trump's pick for Health and Human Services secretary, and chairman of the budget committee, helped author a bill as part of the Republican's Better Way plan. "If you just wanted a bill to put out there as a replacement that's one," he said, "and a bill the Republican Study Committee has developed is also a replacement option."

He stressed that "physically it can't happen right away," and said, "I think it will be more of a methodical, open, transparent process of going through each of these issues and working hard to get the bipartisan support to do what's best for the country.

"The day after we vote to repeal it people aren't going to wake up and not have health care coverage. If you look at the Medicaid program in Arkansas, those policies have been put in place and until the state Legislature meets and changes that plan those policies will remain in place. We have to give the states time to react to whatever laws we create."

Asked about the Democrats who have announced plans to boycott Trump's inauguration on Friday, Westerman said, "At some point we've got to start doing what's best for the country. I hate that they are acting that way. I think they'll have to sleep in the bed they're making on that."

He said Republicans "have been outspoken against some of the things Trump did during the campaign and I think we will continue to be that way after he's inaugurated. I don't see a problem with that.

Westerman said he will be at the inauguration, but noted he has to return to Hot Springs later that afternoon so he can escort his daughter, Amie, who has been elected to the homecoming court at Fountain Lake High School, for the game that night.

"So I may not make it for all the inauguration festivities, but I have confidence in my staff to get me there and back here for my daughter," he said.

He also noted the four members of the House from Arkansas will be hosting a delegation breakfast Friday morning for everyone from Arkansas who signed up for tickets to the inauguration.

Westerman, who was named this week to the House's Transportation and Infrastructure Committee, said he will "do the best I can" to push many pending projects in the state through, especially in the 4th District.

"When you look at just roads and highways, there are a tremendous amount of projects," he said, noting Interstate 49 from Fort Smith to Ashdown needs to be finished. "That will be really big for the western and central parts of the state. Actually the whole state will benefit," he said, noting it will connect from Louisiana to Missouri with ties into Texas.

He said Interstate 69 from Houston to Detroit affects a big part of the 4th District, and with the Panama Canal being widened, they will need the increased infrastructure to get more products to and from the Gulf with a lot moving through Arkansas out of Texas.

"Interstate 30 is the only major highway right now and Texas is concerned about that becoming a bottleneck getting goods out, but with both Interstates 49 and 69 that will help alleviate that."

He said another big priority in the near future is getting a bypass in Arkadelphia to help with the increased traffic from the new paper mill. "There are 400 additional logging trucks a day coming and they're going through downtown Arkadelphia. It's the only city between Little Rock and Texarkana that doesn't have a bypass."

Westerman also stressed his continued support for a proposal by the Arkansas National Guard to move a portion of its Youth Challenge program to the closed site of the Ouachita Job Corps in Royal.

He said he has been working with ANG Maj. Gen. Mark Berry "basically since they announced the Job Corps was closing. I had toured the Youth Challenge program (at Camp Robinson) and I know they need more space. It's a very successful program they have there."

He said he feels the Garland County community will work well with the program and "there are a lot of opportunities there," noting he has talked to school districts in the area about combining their alternative learning environment programs with the Youth Challenge program.

"It's a much better way to use that space than a temporary refugee shelter," as proposed by the Department of Health and Human Services.

He said they were already working on the Youth Challenge plan when he got an email on a Friday afternoon that HHS officials were going to be at the Job Corps that Monday to evaluate the site for their plan.

"At best it was poor communication," he said. "Fortunately, my staff saw the email. Some local officials didn't know about it until they saw it on the Little Rock news. Needless to say, I had a pretty stern conversation with HHS over the way they handled it."