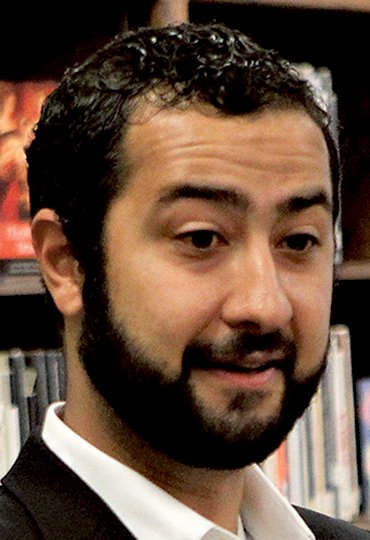 EDITOR'S NOTE: This is the second in a series of articles detailing the efforts and involvement of two Lakeside High School graduates in the Syrian Emergency Task Force, which advocates for the safety and well-being of Syrian civilians during the country's ongoing civil war.

A wave of democratic uprisings in north Africa and the Middle East encouraged Mouaz Moustafa to support and advocate for civilians seeking fairer systems of government.

"I was glued to the TV," Moustafa said. "I could not even fathom that people would go out and protest against these dictators.

Moustafa was born a Palestinian refugee near the Syrian capital city of Damascus. His family moved to Arkansas when he was 11 years old. He later graduated from Lakeside High School and the University of Central Arkansas in Conway before moving to Washington, D.C.

The offices of former U.S. Rep. Vic Snyder, who served in the House of Representatives, and former U.S. Sen. Blanche Lincoln provided Moustafa with his first experience in politics and government. Moustafa worked in Lincoln's office until she was defeated in 2010 by U.S. Sen. John Boozman.

Lincoln's failed re-election bid coincided with the arrival of the Arab Spring, a series of widespread protests and demonstrations throughout countries in north Africa and the Middle East. Civilians, often of younger demographics, sought to end the rule of authoritarian regimes and usher in a new age of democracy and freedom.

The Jasmine Revolution in Tunisia is credited with sparking the movement. It is also seen as the only "success" of the wave of uprisings.

Protests erupted in December 2010 after Tarek el-Tayeb Mohamed Bouazizi died by self-immolation after officials stopped him from selling vegetables in the city of Sidi Bouzid. About 300 people died in subsequent clashes with authorities.

President Zine al-Abidine Ben Ali was pressured into resigning in January 2011 after 23 years in power. He fled to Saudi Arabia and was later sentenced to life in prison in absentia. Tunisia held its first democratic parliamentary elections in October 2011, but activists still push for more protection of human rights.

The first extension of the movement reached Syria, Bahrain, Yemen, Libya and Egypt, where Moustafa became involved. A Christian Egyptian lawyer and a Muslim Egyptian lawyer reached out to Moustafa in D.C. for his assistance in obtaining statements from members of Congress calling for Hosni Mubarak, president since 1981, to step down.

Mubarak did step down in February 2011 and handed power to the military. The Islamist Muslim Brotherhood won control in subsequent elections, but was removed from power by a popularly-backed military coup in 2013.

Retired Field Marshal Abdel Fattah al-Sisi was elected president in May 2014. Many critics of the government and activists remain in jail.

In Libya, Muammar al-Qaddafi ruled as an authoritarian dictator for more than 40 years before he was overthrown in 2011. Libyan Americans who knew Moustafa speaks Arabic sought him out because they felt they had no representation in the U.S. The country's ambassador remained loyal to Qaddafi.

Qaddafi was captured and killed in October 2011. Numerous competing factions are still vying for control of the country as many armed conflicts persist.

Syrian sympathizers were later introduced to Moustafa through Libyan contacts. Two doctors from New Jersey and D.C. asked if Moustafa could lead political advocacy efforts in the capital.

"For me, it was my heart," Moustafa said. "I grew up there. I was born there. I had family there."

Moustafa said he believes he would be dead by now or imprisoned if he had not left Syria. He said he remembers civilians living in fear of the authoritarian regime, but they still led normal lives.

Many members of his family from Syria are now refugees. Moustafa said his grandmother still lives in Syria with his uncle, who takes care of her.

Advocating against the rule of Syrian President Bashar Hafez al-Assad required Moustafa to take extraordinary steps. He said he was afraid for the safety of his family should the regime learn of his actions. His mother encouraged him to take up the fight, but they knew he could no longer communicate with family inside Syria.

Moustafa founded the Syrian Emergency Task Force with the two doctors in 2012. He has since helped members of his family escape Syria and find residences in Europe to restart their lives.

Peaceful protests began in Syria in 2011 with the Arab Spring. During the demonstrations, children in Daraa, a city in southwestern Syria were arrested, tortured and all but one were killed for writing graffiti advocating for the end of Assad's rule.

The parents of the children were dismissed and taunted by authorities, setting off widespread protests throughout the country. Protesters were met with violent responses from the government as the movement escalated into a violent, military conflict.

The Syrian Centre for Policy Research estimates more than 470,000 Syrians died during the first five years of the conflict. An estimated 11 million Syrians fled their homes after the Syrian Civil War began in March 2011, according to syrianrefugees.eu. At least 4-6 million refugees have fled to other countries.

Moustafa and a limited staff lobbied members of Congress, the White House and other government agencies to issue statements condemning the violence against protesters and calling for a political transition. Fellow Lakeside and UCA alum Natalie Larrison joined the SETF last year as director of outreach. She said she could no longer be a bystander after she learned all of the facts about the conflict.

"I would be curious to know what I would do if I had known about them much sooner in a real way, " Larrison said. "Maybe I turned a blind eye to it, because of the same reasons many people don't know what is going on in Syria."

Moustafa said he grew frustrated early on with his work with the SETF. He felt like the organization was accomplishing little for the people of Syria.

"I was doing a million meetings in Washington resulting in nothing, but I could give flour to a village," Moustafa said. "I can give baby formula to an internally displaced family. I can support these independent activists that are taking videos of the protests and showing the world what was happening."

Out of his frustration, Moustafa flew to Istanbul, Turkey, to sneak into Syria. He sought to personally help the civilians and the scope of SETF changed.

The organization was no longer focused on political advocacy. Moustafa said he wanted to accomplish more on the ground and empower the people of the revolution.

"Now, when I spoke, I spoke with a lot more credibility," Moustafa said.

SETF opened four new offices inside Syria and expanded its approach. Moustafa said the organization was not able to push the parameters of policy, but its new direction could ensure American diplomacy and aid was utilized in the best ways possible.