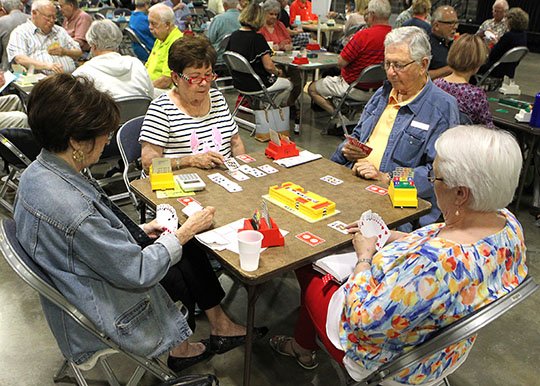 For the remainder of this week, the Hot Springs Convention Center will be filled with teams of avid card players hungry for competition.

The Resort City Regional bridge tournament began in the convention center Monday afternoon and is scheduled to be held there through Sunday afternoon. The tournament is part of the American Contract Bridge League, which is about 170,000 members strong and contains 25 districts throughout the country.

"It's a really good event for the town, and about half the people come from out of state," Irving said. "The rest are from Arkansas."

The Resort City Regional represents the states of Arkansas, Louisiana, Mississippi, Alabama, Tennessee and Kentucky. Irving said the tournament has been held in Hot Springs for the past 40 years or so, "usually every other year." He said in the world of bridge tournaments, it is a mid-sized one that usually draws around 800 competitors to town.

Players said their performance in the tournament can earn them points, which will serve to increase their status in the league. Betty Lawrence, of Shreveport, La., explained that the title of "Lifetime Master" is achieved through earning a certain amount of points, which are assigned different colors.

Lawrence said Resort City Regional gives its participants the opportunity to earn gold points, which are important in earning the title.

"You need so many points and different colors," she said. "Gold points are very difficult to get, and you have to go to regionals and nationals to get them."

"The more challenging it is, the more competition, the more we like it," Kish said. "It makes it tougher; makes you think."

Irving said the tournament draws bridge players from 25 states, with about half the players coming from outside of Arkansas. He said because many of the people competing in the tournament travel here, the tournament is beneficial to Hot Springs.

All of the bridge players who were interviewed earlier this week said they enjoyed Hot Springs during their time at the tournament. Lawrence said she uses the event as a reason to enjoy the area.

"The excuse is to play bridge, and then we enjoy the food and the amenities of Hot Springs," Lawrence said. "We just enjoy coming up here very much."

"It's a really good event for the town," Irving said. "We make a point of promoting Hot Springs because we think it's a fun place to be, and we want the people that come here to experience Hot Springs."