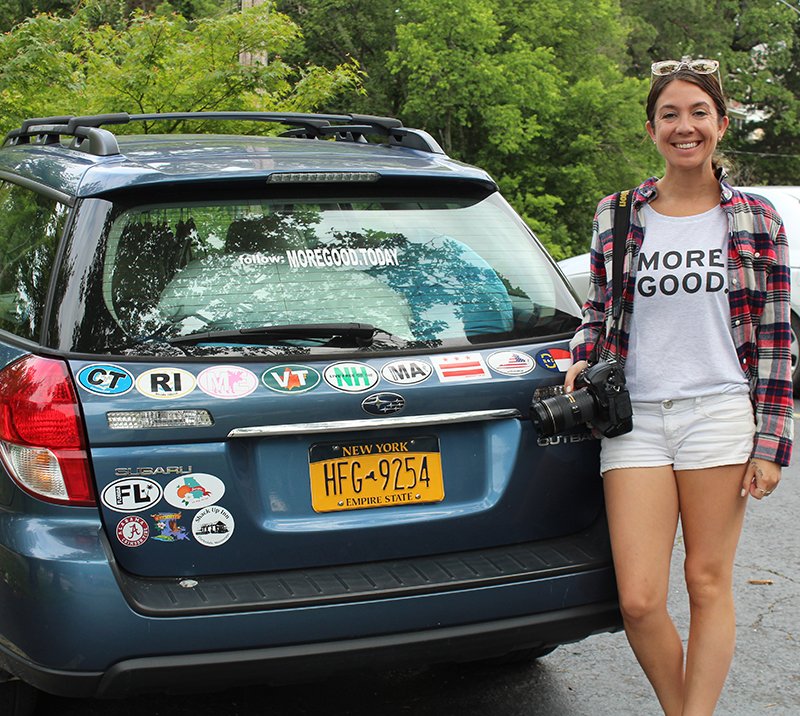 The Sentinel-Record/Grace Brown FINDING "MORE GOOD" New York native Mary Latham is taking a cross-country road trip in an attempt to process her mother's death. Along the way, Latham is collecting stories about selfless acts and selfless people.

Nearly seven months ago, Mary Latham packed up her most essential items and left New York, starting on the road trip of a lifetime. She set out with one goal in mind: to show people that there is "more good" in the world than they may realize.

In 2013, Latham's mother died due to complications following breast cancer surgery. In an attempt to cope with the sudden loss, she quit her three jobs in Manhattan and moved to the Caribbean. It was there she experienced something like "an emotional, physical and mental breakdown all at once."

She returned to New York and continued her wedding photo business, but felt stuck. Before she died, Latham recalls her mother telling her that "there is more good out there, and (she) just need(ed) to find it." That prompted her to start the "GrAttitude Project," where she collected stories of human kindness to provide hope and healing for others.

"I want to show there is 'more good' in every single state," she said.

Latham started by posting uplifting stories on Facebook, and eventually morphed into "More Good" when she decided to embark on her mending migration. Today, all the stories she collects are going to eventually be compiled into a single book meant for hospital waiting rooms around the country.

So far, Latham has visited 60 cities in 16 states in just under seven months, stopping in at least two or three cities in each state she visits. The odometer in her mother's 2008 Subaru Outback read around 9,000 miles when she reached Hot Springs.

To fund her trip, Latham set up a GoFundMe page in August and has raised over $16,000 to date. The money goes toward gas, mechanical repairs and little things along the way, but all of her lodging has been provided through the generosity of others.

She started off by staying with friends in the northeast corner of the country, and from there it progressed to friends of friends and, eventually, she found herself sometimes staying with complete strangers.

"I budget on the hospitality and kindness of other people. It's all random people that will support my mission and give me a place to sleep. I'm very trusting, but I'm also not stupid, so I am being very cautious about the whole situation. I feel like no one has trust anymore, and it takes a lot for someone to reach out and open up their home to a stranger," she said.

Typically, she meets people at one point or another on her trip who have a friend in the state she plans on visiting next. That person will make a few phone calls, and before long she has a place to stay. Both connections she made in Arkansas happened to be with complete strangers.

"Coming across nice people is just so comforting for me because this is a very scary trip," she said. 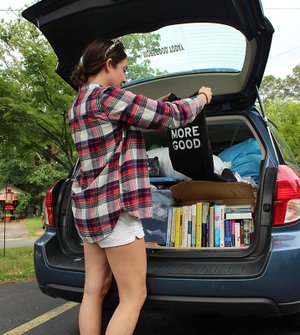 The Sentinel-Record/Grace Brown ONE STATE AT A TIME: Mary Latham, of New York, spent a short time in Hot Springs while on her cross country road trip. She is independently traveling to 50 states, while collecting uplifting stories for her book.

She collects the stories she plans on using for her book mainly through her email, [email protected] She encourages anyone who has a story of human kindness to submit their story. She has found this to actually be one of the harder parts of her mission, but feels that everyone has had little things that have impacted their life that are worth sharing.

"A lot of the stories I collect are like these beautiful projects, or things that started from somewhere dark, which is kind of what happened to me. I am trying to create a light in that darkness," she said.

Latham stresses that the stories do not necessarily have to be grandiose. One of her favorite submissions was a short, simple story about a woman giving a bag of M & M's to a bank teller.

"I feel like I'm constantly trying to inspire people to do these acts more often, because you never know who you are affecting or inspiring. I'm also trying to get them to tell me about it. There is still good everywhere, it's just getting people to take the time and write me about it," she said.

Overall, the trip has been instrumental in Latham's healing process and helped to shift her paradigm. Latham left Hot Springs on Thursday, and her next stop is in Oklahoma.