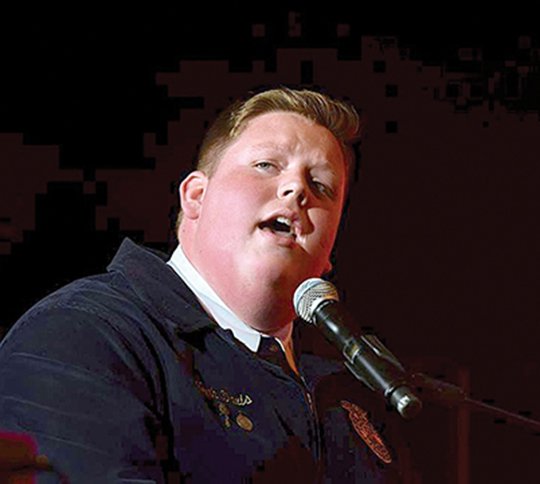 Davis played the piano and sang "Stay," by Rihanna, in the contest finals. He is the son of Kristie Stevens and Darron Davis.

"I was extremely surprised," Davis said of the moment when his name was called as the winner. "The other finalists were so talented. It could have gone any way. They did a phenomenal job in the final three.

"So, when they called my name, I was taken aback by it. I was overwhelmed and we had that moment where we were hugging because we were all happy with whatever place we got and excited for each other."

Davis performed in front of an estimated crowd of 6,000 people during the finals on Friday in Bankers Life Fieldhouse, home of the NBA's Indiana Pacers. The first-place award earned him the opportunity to perform again the following day before a crowd of about 10,000 people at Lucas Oil Stadium, home of the NFL's Indianapolis Colts.

"First of all, I love Rihanna," Davis said. "She is such an artist and all of her music is amazing. It's already a slower song, so it transferred well to playing piano. It's one where you can show your emotion and get the crowd involved with the song through the way you emote the words of the song.

"I thought if I was going to be in front of a big crowd and behind a piano, a really good way to have stage presence is to sing an emotional song. If the crowd doesn't get into what you are singing, or if they don't know the song, they don't react as well."

Davis said he first became involved in music as a child through his church.

"It's been a part of me since I can remember," Davis said. "It's stress relief and it's art. It's a way to express yourself. I love taking a song and making it completely new by doing it a whole, brand-new way that I've never heard before."

Performing "Stay" helped Davis earn a trip to the national convention two years ago. Davis missed out on the top three in the state competition as a high school junior, but he sent in an application and a video audition for the national talent contest.

The state's top three finishers received professional quality video production for their national submissions. Davis performed "Stay" and "Halo," by Beyoncé in his audition and was invited to perform at the annual conference in Louisville, Ky.

Davis has been involved with FFA since he began in the eighth grade at Lake Hamilton Junior High. He credits FFA with helping him build his leadership skills, communication, interpersonal skills and more.

Davis is now a nursing major at Arkansas Tech.

"Tech is an amazing campus," Davis said. "It's not so huge that you pass people you don't know all the time, but it's not so small that you feel like nothing is happening. You meet so many people. The academics are amazing. My teachers are wonderful. They really strive to help you be successful and I really like that about our teachers.

"There are opportunities in arts, academics, campus ministries, everything. If you want to be involved, (Tech) has somewhere for you to get involved."

The national prize now has Davis evaluating how far he may be able to go in the music industry. He said he may consider auditioning for "The Voice" competition on television or finding another route to establish a music career.

"Winning the national contest definitely gives me confidence to pursue it more," Davis said. "It started out as a hobby, but I think anything you are willing to give 100 percent to, you can make a career out of it.

"I'm a kid from a little town in Arkansas and I didn't expect to make it that far in the competition, much less to win. Just because you don't think you can doesn't mean you shouldn't try."