The Witness returns to roots for fundraiser 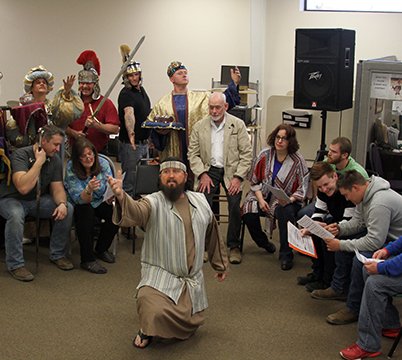 The Witness, Arkansas' only passion play, will return to its roots to present the production to the Hot Springs community benefiting Teen Challenge of Arkansas on Dec. 2 in Horner Hall at the Hot Springs Convention Center.

Admission is free of charge, but donations will be accepted.

Based on the musical drama written by Jim and Carol Owens, The Witness is a musical production which tells of the life and ministry of Jesus Christ as witnessed by the apostle Peter through music and song.

The Witness began in Hot Springs 36 years ago and, according to board president and executive director Judy McEarl, a lot of the cast have been a part of the production for 25 years or more. McEarl has been involved with the production since its inception in 1981.

"We so enjoy each other and have raised our families together. Babies that have played baby Jesus in the past are now singers in The Witness," she said.

The show began as a traveling prison ministry in 1981. From 1985 through 2013 it was presented as a live outdoor amphitheater performance, and has since returned to its roots as a traveling show.

"Any time we can come home and do it here -- this is our roots, Hot Springs is our roots, this is where The Witness was birthed, so to come back here is always special," McEarl said.

Teen Challenge of Arkansas is also celebrating 36 years in the Hot Springs community, and executive director Tim Culbreth said The Witness creates a "creative outlet" for some of the men in the program.

"Our program is very structured, and when The Witness is being put on locally some of our students will participate in it and it's a nice change of pace. A creative outlet is very healthy," he said. "It's not for everybody, that creative outlet and putting on a play or musical, but those that participate have always enjoyed being a part of it."

Teen Challenge of Arkansas is a faith-based Christian discipleship program designed for men who are struggling with life-controlling issues, such as addiction.

Culbreth said this won't be the first time The Witness and Teen Challenge of Arkansas have joined forces for a fundraiser.

"This is actually probably the third time. The first one was in December of 2011, right after we got hit with the tornado, and again in the spring, either last year or the year before -- I think it was the year before -- we called it a Celebration of Freedom, so it's something we've done together in the past," he said.

Culbreth added that all proceeds from the show on Dec. 2 will go toward making a bed available for somebody who needs a recovery program.

"First of all, we don't charge for the guys to be in the program. We rely on donations in order to make the program available without charge. Our budget is $900,000 a year and about a third of that comes in through our thrift store and our work detail that we do," he said. "The other $600,000, we rely strictly on donations."

McEarl has been on the staff of Teen Challenge of Arkansas for seven years as its choir director and GED and tutoring coordinator.

"The men are able to get an Arkansas high school diploma and other certifications that can move them up in the job line. So, the blending of the two ministries for this event is just a win-win situation and I love it that we can do it for the community without any admission charge, but they would know that any donation would go to Teen Challenge, and around Christmas that all just fits. It's just a good fit," McEarl said.

Print Headline: The Witness returns to roots for fundraiser