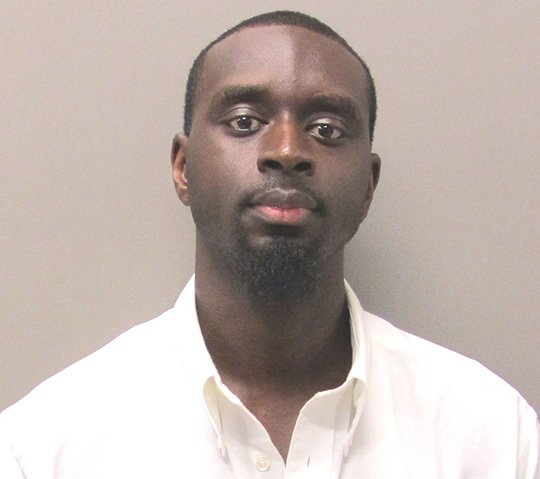 The trial of a Hot Springs man accused of first-degree murder and other felonies for killing a local woman during a triple shooting in 2014 began Tuesday in Garland County Circuit Court.

Steven Leroy Swanigan, 33, a previously convicted felon who has remained in custody since his arrest on May 7, 2014, in lieu of $250,000 bond, faces up to life in prison if convicted on the murder count. He is also charged with two counts of first-degree battery and possession of a firearm by certain persons, each punishable by up to 20 years.

His alleged accomplice, Benjamin Mickey Pitts, 28, also of Hot Springs, is scheduled to stand trial on the same charges Oct. 23.

Garland County Deputy Prosecutor Kara Petro, who is representing the state along with Chief Deputy Prosecutor Joe Graham, told the eight-woman, four-man circuit jury the case was going to involve a lot of witnesses and evidence and "every piece is important because it ties it all together."

Petro said that around 5 p.m. on April 30, 2014, the murder victim, Mayela Mata, 26, was at her apartment at Springwood Townhomes, 200 Springwood Road, off Majestic Lodge Road, with her 20-month-old daughter, her boyfriend, Terrance Scott, his brother, Joseph Scott, a visiting friend, Antouin Bond, and a 15-year-old male resident who was upstairs.

Mata was struck in the head and staggered into the kitchen and collapsed onto the floor where Terrance and Joseph Scott had thrown themselves upon hearing the gunshots, Petro said, while Bond was shot once in the back. The baby was struck by bullets on her left side and her right arm and was also bleeding.

"The shooter leaves very quickly," Petro said. "This all happened so suddenly and so very fast." She said two neighbors in a nearby apartment heard "what sounded like firecrackers" and looked out to see a white Cadillac with a blue top pulling away and saw a black male on the passenger side "with his foot hanging out the door holding a handgun" pointed back at the victims' apartment.

Garland County sheriff's deputies and other emergency responders arrived on the scene a short time later and Mata and Bond were transported to CHI St. Vincent Hot Springs where Mata was later pronounced dead and Bond was treated and released. The baby was airlifted to Arkansas Children's Hospital in Little Rock for treatment and eventually released.

Petro said 9-mm and .40-caliber shell casings were found inside the apartment and just outside the door and there were multiple bullet holes in the walls inside. Security video from the apartments showed two black males in a white Cadillac with a blue top pulling up to the apartment and one suspect going inside.

Earlier in the day, Sheriff's Deputy Phil Fisher had seen a white Cadillac with a blue top at a residence on 115 Oakhill St. while there on an unrelated matter and noted the hood was up and two black males were working on it.

When Fisher heard the description of the suspect vehicle in the shooting and noted it sounded like the car he had seen he returned to the Oakhill residence and found the Cadillac there. He noted the hood was still warm and the passenger door was ajar, Petro said, and a fluid trail lead from the car leading out of the driveway.

Investigator Russell Severns followed the fluid trail which lead back to the victims' apartment on Springwood, she said, noting, "It wasn't continuous, but consistent enough for him to follow because of how fresh it was."

The owner of the Cadillac was in prison, she said, but investigators spoke to his girlfriend who told them Swanigan had borrowed the car that day telling her "he didn't want his car seen." She said she had warned him it was leaking power fluid and when she left Swanigan was there with a friend she later identified as Pitts in a photo lineup.

Petro said they had video of a Cadillac circling through the parking lot of Sonic, 1528 Airport Road, shortly before 5 p.m. and a female employee identified the driver as Swanigan in a photo lineup, noting she remembered him because the car had almost struck her, forcing her to jump out of the way.

Petro said investigators later searched the home of a female friend of Swanigan's where he had been staying and found 9-mm, .40-caliber and .45-caliber ammunition that matched the brands used in the shooting. There was also security footage of Swanigan and Pitts buying the ammunition at Walmart. The friend said Swanigan had four guns, including a .40-caliber and a 9-mm.

Swanigan's attorney, Bobby Digby, told the jury, "You've heard a lot of things you may hear, but there are a lot of things you're not going to hear," noting there was no motive for Swanigan to do the shooting. He said Swanigan was a friend of Terrance Scott and when asked Scott had said he didn't think Swanigan had done it.

Digby said Petro also didn't mention the large amount of money, marijuana and other controlled substances found at the victims' apartment or that Terrance Scott had been seen running from the apartment before deputies arrived, hiding a bag at a neighbor's house and hiding something else in the trunk of his car.

Digby said the girlfriend of the Cadillac owner had initially lied to investigators when asked about the car, but the investigators "came back with a prepared statement for her to sign and that's when Steven Swanigan's name came up."

He also noted the "fluid trail" didn't go through the parking lot of Sonic which would seem to refute the evidence it was the same car seen in the video. He said the video also shows the car "never got closer than 15 feet" to the employee who claims to have seen Swanigan and there would be evidence presented "she is legally blind."

"There is a bunch of circumstantial evidence that just doesn't get them all the way there," Digby said.