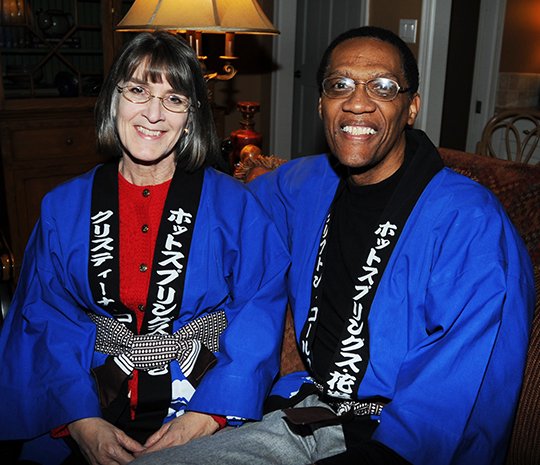 The Sentinel-Record/Mara Kuhn SISTER CITY CHAMPION: Clifton Coleman, right, shown with his wife, Kristina, at a reception for a Hanamaki, Japan, official in Hot Springs in 2013, died unexpectedly on Wednesday at the age of 66.

Clifton Coleman Jr., a local humanitarian who played an integral role in the city's Sister City Program, died unexpectedly on Wednesday at the age of 66.

A teacher, mentor, and musician, Coleman was known in the community as someone who "always saw the good in people," said Mary Zunick, Visit Hot Springs' cultural affairs manager and executive director of the Hot Springs Sister City Program, adding that his friends, family and the community are "going to feel this loss in so many ways."

Coleman was a board member for the program, a role that Zunick said he took to heart.

"Thinking back, he went to Japan first as a teacher scholarship recipient. Sometimes those teachers go and they come back and they're a little involved, but Cliff took it to heart and saw the importance of the Sister City program. He was incredible," she said.

While teaching at Hot Springs School District in 2006, Coleman applied for Sister City's teacher scholarship program and was selected. He traveled to Hanamaki, Japan, and, upon returning to Hot Springs, incorporated the information learned during the trip into his teaching objectives.

"Sister City has been a part of his life for the past 10 or 12 years. But, prior to that, everybody knew Cliff Coleman. Extremely talented piano player, could sing -- and that was his entire life growing up and as an adult. He played piano at his church and sang every Sunday and Wednesday," Zunick added.

Coleman retired from teaching this year but could still be seen performing in various events and venues in Hot Springs.

"The students, when he worked with them, he worked to find their talent so they could share it, whether they performed an instrument, or they could speak well, or they were organized. He helped all of the students tap into their talents and what they did well and he celebrated that. He and his wife would come out to the basketball games and to the volleyball games and he just loved Hot Springs. He was just an exceptional person and a friend."

Coleman has one son, Karl, and two grandchildren, Kora and Stockton. He married the love of his life, Kristina, in 1975.