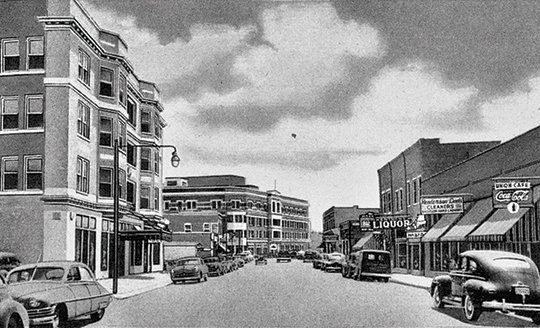 Submitted photo MALVERN HOTELS: Above is a circa 1950 postcard of Malvern Avenue showing the Pythian and the National Baptist hotels.

Jean Lacefield will address the Garland County Historical Society at noon Tuesday at Garland County Library regarding "Black Broadway: The Story of Malvern Avenue -- Looking Back to Go Forward." The public is welcome.

Lacefield will detail the contributions of W.T. Bailey, architect of the Pythian Bathhouse and Hotel, and of John L. Webb, owner of the Woodmen of Union building, later National Baptist Hotel and Bathhouse. Both establishments were designed by, built by, and serviced the African-American community, visitors and performers. The structures anchored Malvern Avenue and what is now the Pleasant Street Historic District.

She will discuss how Malvern Avenue became the employment center for the African-American community and became an entertainment district visited by music and sports celebrities such as Count Basie, Peg Leg Bates, Duke Ellington and his Orchestra, B.B. King, Ike and Tina Turner, Roy Campanella with the Brooklyn Dodgers, Larry Doby of the Cleveland Indians, Don Newcombe with the Brooklyn Dodgers and Art Pennington, a Hot Springs native from Chicago American Giants. She will explore the lives of remarkable African-American women from Hot Springs -- psychologist Mamie Phipps Clark and Dr. Edith Irby Jones.

Lacefield will describe the evolution of Malvern Avenue and the Pleasant Street Historic Neighborhood and the plans for the future of the area.

Lacefield, a native of Hot Springs, retired four years ago from PepsiCo Inc. in Dallas, Texas, as the group manager of Supplier Diversity promoting the inclusion and growth of minority and women-owned businesses throughout the company's supply chain.

As vice president of community outreach, she is responsible for connecting residents, property owners and businesses to address the needs and problems of the Gateway Community. She has led the acquisition of approximately $400,000 in CDBG funding for infrastructure projects in the neighborhood for 2014, 2015 and 2016. In addition, she assisted the association in developing partnerships with Habitat for Humanity, Walgreens Drug and Pharmacy, Walton Family Foundation, Simmons Bank, First United Methodist Church, and other businesses and civic organizations.