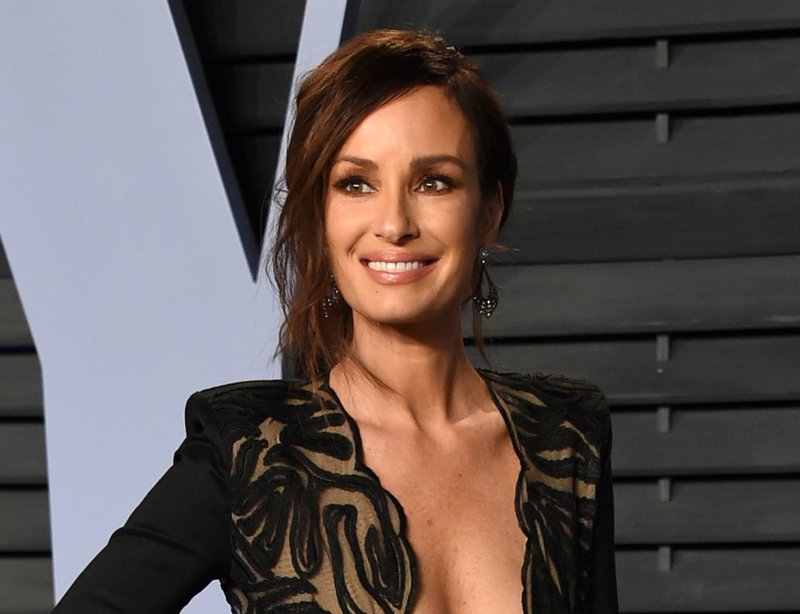 FILE - In this March 4, 2018 file photo, Catt Sadler arrives at the Vanity Fair Oscar Party in Beverly Hills, Calif. Sadler, who walked out on her job late last year after discovering she was paid far less than a colleague, is speaking out about the way women are shortchanged when it comes to salaries and pointing to online tools they can arm themselves with during future negotiations. (Photo by Evan Agostini/Invision/AP, File)

NEW YORK -- Catt Sadler may have walked out on her job late last year after discovering she was paid far less than a colleague, but the former E! News host says she's found a better one -- advocate.

The former journalist is speaking out about the way women are shortchanged when it comes to salaries and pointing to online tools they can arm themselves with during future negotiations.

Sadler, a longtime co-host of "Daily Pop" on E! Entertainment, left the network after learning that on-air partner Jason Kennedy made nearly twice as much money as she did.

She soon found herself a symbol of the wage gap, championed on the red carpet by celebrities that she used to interview, like Eva Longoria, Debra Messing, Natalie Portman and Laura Dern.

"They were saying my name but almost just as a symbol for all of the wrongs and trying to shine a light on that," Sadler said. "It just reaffirms that there are enough women that have had it. Time is up. The silence? No more."

Sadler has teamed up with Luna Bar, which is offering free online resources to combat pay inequality. The nutritional bar brand is also donating a portion of its profits to the American Association of University Women to fund salary negotiation resources.

Sadler said that until laws change or courts get involved, the responsibility of landing appropriate compensation falls on the individual. But she noted that only 30 percent of women actually negotiate their salaries.

"That's way too low. So we've got to get in the game, ladies," she said. "We have to arm ourselves with not only the courage to stand up for ourselves and make some noise and knock on the door and say, 'This is my work and this is what I want.' But we have to be able to back it up with substantial tangible information that makes our argument a strong one."

Some of the tips for job hunters include deflecting questions about salary until after getting a job offer, as well as querying future employers if male colleagues will be earning more for the same work. "We have to ask the hard questions," Sadler said.

White women in America make about 80 cents for every white male's dollar, while Latina women make 54 cents, and black women make 63 cents, according to the American Association of University Women.

The wage gap even exists in Hollywood, with female stars in films such as "All the Money in the World" and TV series like Netflix's "The Crown" being paid far less than their male counterparts, even if they have more prominent roles.

As for her own abrupt exit from E!, Sadler isn't looking back, saying, "I believe I'm on the path I'm intended to be on." But she regrets not pushing for a higher wage package earlier. "I think I tried to play catch-up a little too late. I think that's where I was hurt because I was in the dark for so long," she said.

E! said in a statement that it compensates employees fairly and appropriately based on their roles, regardless of gender. Frances Berwick, president of NBCUniversal Lifestyle Entertainment, said Kennedy has more extensive duties than Sadler, including work on the network's profitable red carpet franchise. "Catt Sadler and Jason Kennedy had different roles and therefore different salaries," he said.

Sadler, for her part, refuses to be bitter. Tuesday is Equal Pay Day and she will be attending a rally at City Hall, relishing her new job. "I'm leaning into it entirely. And I'm honored because it's the most meaningful work I've ever done. And so I like the road that I'm on right now."