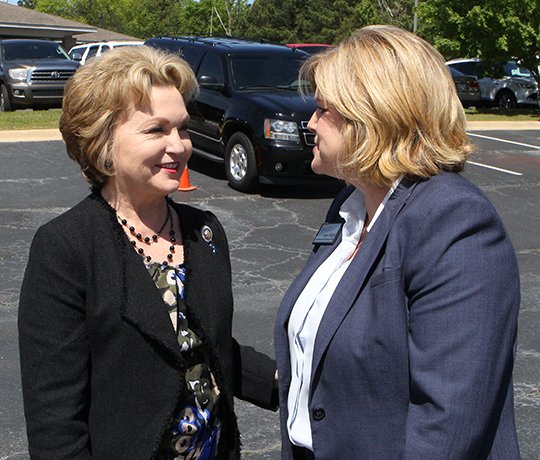 Arkansas first lady Susan Hutchinson said Thursday that the need for centers like the Cooper-Anthony Mercy Child Advocacy Center became evident to her when a friend confided in her about her own story of being abused as a child.

Hutchinson was the keynote speaker for the center's annual Child Abuse Prevention Rally and Luncheon.

"As a soccer mom back in Fort Smith, I had a friend who confided in me that her dad had been a pedophile and she and her sister were afraid to tell their mom because they knew it would hurt their mom," she said. "So they suffered through. My friend admitted that she prayed to God that her daddy would die so that her mom could marry a nice man. I knew then that there were other children that could be praying that same prayer."

Hutchinson served on the board of the Children's Advocacy Center of Benton County for four years.

"It grabbed my heart, that this was what I was supposed to be doing," she said.

Child advocacy centers are safe, child-friendly environments where a comprehensive and coordinated approach is taken in response to allegations of child abuse. All services offered at CAMCAC are free of charge.

Hutchinson urged the community and local officials to step in and join the fight against putting an end to child abuse and "taking abusers out of circulation." She emphasized the need for children to have their voices heard, too.

"In your capacity as a legislator, as a juror, as a judge, the prosecuting staff, law enforcement, it's rare that you will witness what's done to the children. That's rare, but what you will see are danger signals. A child that always pleads, 'Don't send me back to daddy. I know it's his visitation but don't send me back, please,' and they're pitching a fit -- please, judges, pay attention," she said. "Babies shouldn't scream and holler because a certain person holds them. Nine-year-olds should not be depressed. Something is going on, and these ugly things are done in secret."

Hutchinson added, "Almost every time, the assailant is someone you would welcome into your home. There's no horns, there's no moles, there's no toothlessness -- they look like you and me almost all the time. That's the reason I've been referring to them as wolves in sheep's clothing. Help us rip off the sheep's clothing. We can reveal to the world who the culprits are and who we need to isolate away from our children."

Patrick McCruden was honored at the event for being the visionary leader for developing CAMCAC. McCruden is the chief mission integration officer for CHI St. Vincent.

"Patrick was the visionary. He was the person that dreamt and had the courage to make those steps towards developing a child advocacy center in Hot Springs," said Karen Wright, director of CAMCAC and emcee of the event.

Garland County Prosecutor Michelle Lawrence was awarded the 2018 Super Hero Award and a cape during the rally. It was announced that the name of the award has been renamed the Patrick McCruden Super Hero Award in honor of McCruden.