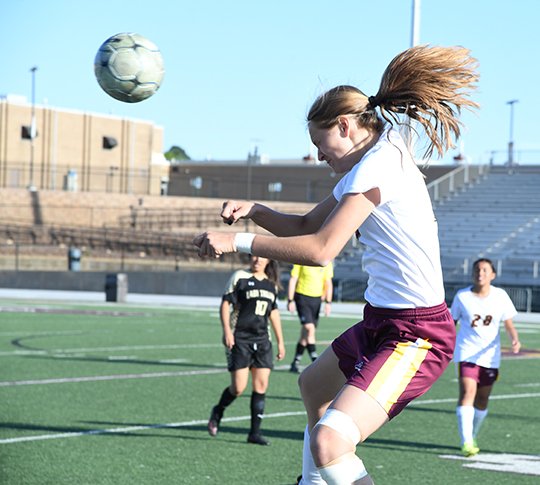 The Sentinel-Record/Grace Brown - Lake Hamilton's Logan Keener (10) heads the ball towards the goal during a game against Hot Springs at Wolf Arena on Friday, April 20, 2018.

PEARCY -- Lake Hamilton did not let Tuesday's loss to De Queen weigh on them as they took on Hot Springs Friday night, rolling to a 7-1 victory over the Lady Trojans at Wolf Stadium for Senior Night.

"This was about our seniors tonight," said Lake Hamilton head coach Stacey Scott. "Logan (Keener) scored, and Jasmin (Garcia) scored. I'm very proud of both of them."

Caitlynn Porter paced the Lady Wolves with four of the the six goals for Lake Hamilton in the first half, including the first of the match. Following a corner kick from Kaili Birmingham, Porter got a foot on the ball and put it into the right side of the net with 3:30 off the clock in the first half.

Porter scored the second goal with 27:48 remaining in the half, taking a shot from about 8 yards out into the center of the net to give the Lady Wolves a 2-0 lead.

Birmingham made it 3-0 just two minutes later, taking a deep shot from about 40 yards out high into the center of the net.

Keener took a deep shot from outside the right corner of the penalty area, blasting the ball into the right side of the net for the 5-0 lead with 10:26 to go.

With a flurry of shots in the final few minutes, Porter picked up her fourth goal with 31 seconds remaining in the period from near the spot to give Lake Hamilton a 6-0 lead and set up the mercy rule in the second half.

"We're still putting it together and still trying to work the combinations," said Hot Springs head coach Heidi Springsteen. "I saw a lot of combination passes up front, a lot of opportunities, some through balls. I was encouraged. We held onto it a little longer than we needed to at times in the first half. We could have had some more shots.

Porter got involved in the final goal for the Lady Wolves, crossing to Garcia just eight yards in front of the goal who put it into the right corner with 11:13 to go in the match.

"Jasmin I've had for three years," Scott said. "She's played forward; she's played midfield for me. She's worked so hard. She's one of those I can depend on all the time. Her work ethic is great."

Alejandra Clark picked up Hot Springs' first goal on the road this season two minutes later as she took a shot from just inside the penalty arc, putting the ball into the left side of the net.

"She's a fighter," Springsteen said. "She plays with a lot of heart. I'm glad she got one tonight."

Jennifer Aguilera had three saves and two blocks on the night with four additional saves coming from the Lady Trojan defense. Hot Springs' offense shot 60 percent with six of its 10 shots on target.

"In the back, the girls fought hard," Springsteen said. "We just had a couple little mistakes or miscommunication that they capitalized on. I'm proud of them.

"Bri (Aldaz) is doing an awesome job at sweeper. That's been a good spot for her. She's done great back there to tell the girls who to mark."

Kayla Mark had three saves and two blocks versus one goal while the Lady Wolf defense accounted for two additional saves and a block.

"Brianna (Tracy-Withers) has an injury," Scott said. "Kayla is my backup, and she practiced yesterday. It was her first day to practice.

"Kayla has played well all year, defensively. Last game, we moved her to midfield and tonight to keeper. It's great to have a player that is that versatile."

Lake Hamilton had 31 shots on the night with 14 on-goal for 45.2 percent efficiency.

"These kids just have heart," Scott said. "They've worked hard, and I told them before the game that I'm so proud of them. They've improved so much, and they're a great group of kids, every one of them."

Lake Hamilton is scheduled to host Lakeside (9-8, 6-3) Monday before traveling to Hot Springs for a rematch on Tuesday.