Trojans triumph on the road at Lake Hamilton 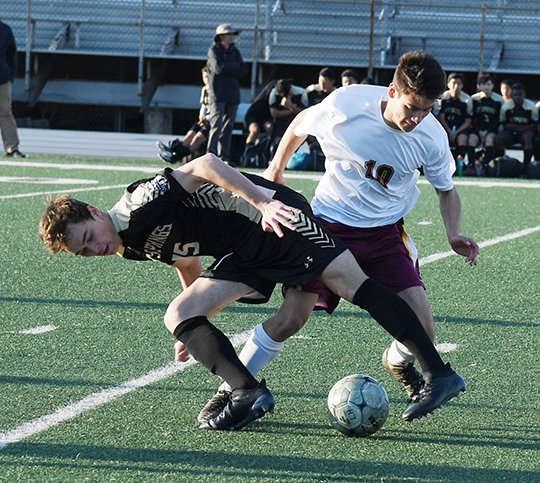 The Sentinel-Record/Grace Brown - Hot Springs' Jack Selig (15) attempts to maintain control of the ball as Lake Hamilton's Acxsel Rios (10) goes to defend during a game against Lake Hamilton at Wolf Arena on Friday, April 20, 2018.

"I thought we did pretty well," said Lake Hamilton head coach Stan Cooper. "Hot Springs and De Queen, like I said before, I think we're a level under them. I thought the first 25 minutes, we did really well and played with them. Our midfield kind of got to sinking a little too deep and couldn't keep everybody up because they were too worried about scoring.

"I'm proud of the way we played. I felt like we showed them a good performance. Hot Springs is a good team. They didn't look like they fell off any after playing De Queen last night."

Hot Springs took five shots on goal from the 20th minute until Josue Hernandez drew Lake Hamilton keeper Landon Kitt out of the goal to score at the 15:47 mark. Kitt had successfully come out and blocked a shot minutes before, but Hernandez chipped the ball over the diving Kitt to put the Trojans on the board first.

Spurred on by the first goal of the match, the Trojans continued to press. The move proved fruitful as Hernandez took a shot from near the mark and put it in for a 2-0 Trojan lead with 12:50 to play in the half.

Hot Springs made several offensive blunders before the halftime buzzer, with several offside calls, but Lake Hamilton was still unable to find the back of the net until the second half.

With 3:07 off the clock in the second half, Dereck Strong drove the ball down the field, dodging Trojan defenders before lining up and driving the ball into the right side of the net past Hot Springs keeper Johnathan Altamirano, drawing the Wolves within 2-1.

Unfortunately for the Wolves, that was as close as they would get following a two-goal blast from Hot Springs roughly three minutes later. With 30:41 left in the match, Johnathan Aquino took a sharp angle on the left post to give Hot Springs a 3-1 lead.

Two minutes later, Adrian Santillan took a deep shot from around 45 yards out into the left side of the net to give the Trojans a 4-1 lead with 28:07 to go. Wilfredo Yanez got the final goal for the Trojans with 12:29 to go.

"I'm proud of them," said Hot Springs head coach Geoffrey Hedrick, while looking ahead to next week's district tournament. "It's not perfect, but when this conference tournament is over, we're going to have a good week to prepare for state, if we make it."

Altimirano finished with four saves and two blocks in 80 minutes of play, and the Trojan offense had 39 shots with 26 on-goal for 66.7 percent efficiency.

Kitt finished with 16 saves with five more from the Wolf defense.

"He's beginning to come around a little bit," Cooper said. "He's injured an Achilles tendon, too. I've got an Achilles tape job on him now."

Lake Hamilton took just 12 shots, but it was 50 percent efficient with six on target.

Hot Springs is scheduled to host Texarkana (2-9, 0-8) Monday before a second match against the Wolves Tuesday at at Tommy J. Holt Memorial Field at Joe Reese Stadium.

Print Headline: Trojans triumph on the road at Lake Hamilton