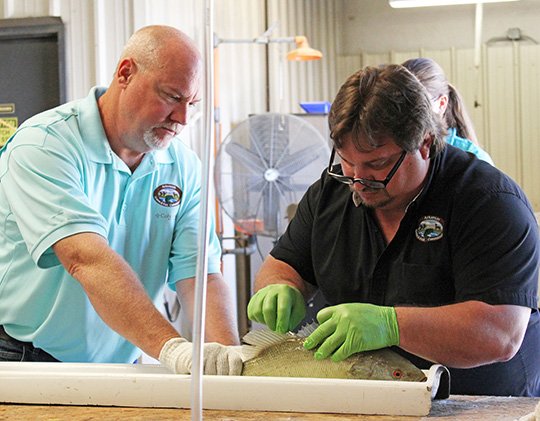 The Arkansas Game and Fish Commission on Friday tagged the fish that will be released into lakes Hamilton and Catherine next week for this year's $100,000-plus Hot Springs Fishing Challenge.

The seventh annual challenge, presented by Visit Hot Springs, will begin at 6 a.m. Tuesday and end at 5 p.m. July 31. Anglers will have the chance to catch one of 71 tagged fish to win a cash prize, which will range from $500 to $15,000 for "Big Al," the top catch in the annual contest.

In addition, the value of any of the $500 fish caught during the annual Free Fishing Weekend on June 8-10 will be doubled to $1,000 each.

The total possible prize money is $101,000, a record amount for the contest in celebration of last year's catching of "Big Al." Last year, the total prize money was $86,000.

"But you're not going to get out of me what he is," Newman said, laughing. "I'm ironclad -- loose lips sink ships!"

Pete Clark, of Magnet Cove, is the only fisherman to catch "Big Al" since the challenge began in 2012, a news release said. Clark reeled in the prizewinning fish, which was a largemouth bass, on Lake Hamilton in 2017.

Newman said clues will be given out in June and July about "Big Al" if he has not yet been caught.

"They're going to kind of do the same format as they had last year, which was if he's not caught by a certain date then they'll give a clue," he said. "They'll give up to three clues, with the last clue being the GPS coordinates of where the fish was let go."

Last year, the decision was made to move the challenge up a month earlier to avoid the hot summertime weather, but Newman said the decision produced very few returns, so the challenge was moved back to the May to July schedule this year.

"It was moved up a month last year to where it wasn't so hot because, typically, fish don't bite as well during that hot, hot weather, so that was their thinking as far as moving it up last year," he added. "Also, I think they had a lot of people that scheduled their vacations around the challenge and that's why they moved it back to the original time this year."

The contest is open to anyone with a valid Arkansas fishing license. Individuals who catch the tagged fish should call the number listed on the tag, which will also list a prize number. Both the fish and the tag must be presented to receive the prize.

No cash prize will be awarded to any participant presenting a tagged fish that has been caught other than during the fishing period. All tagged fish must be caught in accordance with all state and local laws, codes, rules and regulations.

Newman said the tags will be located close to the dorsal fin on each of the fish. He said anglers have the choice of either harvesting the fish or letting the fish go after being awarded the prize money.

"Most people actually harvest the fish and take them home and clean them, especially with the bluegill and catfish," he said. "I do believe in the past that somebody had cleaned the fish before they even realized the tag was in it, but, if I'm not mistaken, they are supposed to have the fish with the tag in order to get their prize."