Rotary aims to double clubs by '25 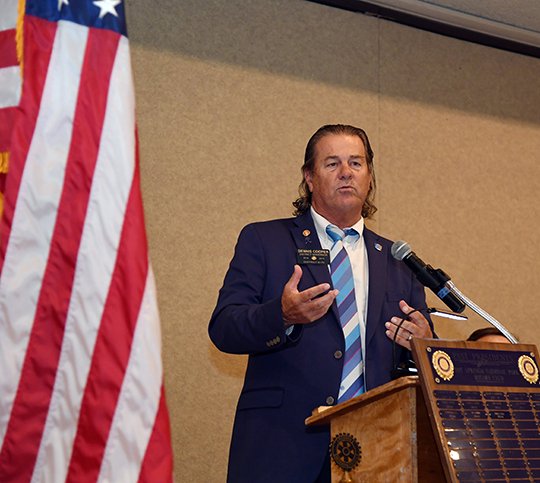 Rotary International is looking at doubling the number of its clubs worldwide by 2025, according to its district governor.

Cooper went over both his and Rotary International President Barry Rassin's goals and visions for the upcoming year, which include involving more young people in Rotary by doubling the number of Rotary Clubs in the world by 2025. At the district level, goals include having Rotarians become more involved in the community by completing service projects, increasing Rotary membership, and participating in the Rotary Global Rewards program.

In 1985, Rotary International launched PolioPlus, a campaign to rid the world of polio, and Cooper said that Rassin hopes to see Rotarians continue the fight against polio in the upcoming year by having each club host an event benefiting the campaign, whether by raising funds or awareness.

"It's surprising how many polio survivors that we have that are Rotarians in our district. There is more than just one or two," Cooper said.

He added that at a recent district conference a speaker introduced him to an idea for a fundraising event called a Zero-K that he thinks would generate great interest in the community and raise money for the fight against the disease.

"We've all heard of marathons, half-marathons, 10K, 6K, 5K. A Zero-K is just like any other race; you have your registration fee, get your T-shirt, you have your food, you have your entertainment, all that sort of stuff, and the only difference is, as soon as that foot crosses over the start line, you're finished," he said.

Cooper said less than two months ago Venezuela suffered what they thought was the country's first polio outbreak in nearly 30 years. He said testing later confirmed the outbreak was not polio, but a very similar disease.

"As we stand today, we have two cases (of polio) in Afghanistan and three cases in Pakistan, so that's 13, compared to 22 last year, compared to the year 1988 when we first started, and we had 350,000 cases of polio that year. We've come a long way on that," he said.

A program Cooper said he hopes to see local Rotary clubs become involved in is the Rotary Friendship Exchange, which is an international exchange program for Rotary members and friends that allows participants to take turns hosting one another in their homes and clubs. He compared the Rotary Friendship Exchange to the Hot Springs Sister City Program, which facilitates a relationship between Hot Springs and Hanamaki, Japan.

"Rotary Friendship Exchange is more informal; you can go into a Rotary site and basically indicate what countries you would like to visit, and if there is somebody from that country that would like to visit Arkansas, it's sort of a match," Cooper said.

He also introduced Rotarians to the CHOICES program as a way to become more involved in the community and local schools. CHOICES is an interactive decision-making workshop designed to encourage students to stay in school and empower them to achieve academic success.

"As you know, we take better care of our animals, our lawn mowers and our vehicles than we do our own health," Cooper said. "If we can do things that will help kids be healthier, whether it be a Healthy Smile program or learning about preventive health, I think that would be awesome, and the same thing with literacy.